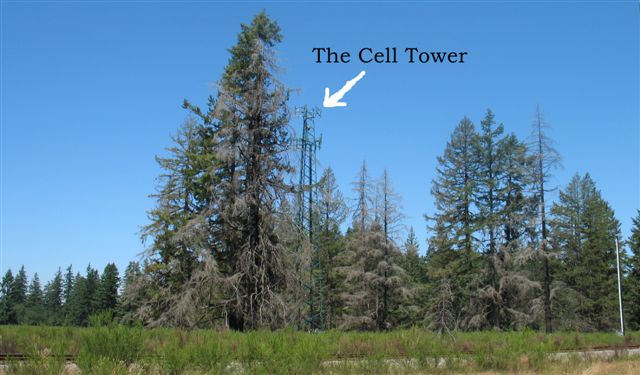 Cell Phone Tower on JBLM near Tacoma, notice the dying trees all around. Credit: Yael Klein.

“Saturday morning I was driving north towards Tacoma where a scene caught my eye on the west side of SR 507, 2 miles south of SR 7 & Spanaway. To my left I saw a gathering of old, dead Fir trees standing in their place, as in a circle. When I looked closely, I saw a very tall green cell tower in the center of them all. The height of the trees was as tall as the cell tower (see picture). My body quivered to such scenery.

To make sure I get across to you what I mean, I would like to describe to you that when a tree dies on my land, its colors change from green to pale green to orange to yellow and, lastly, to brown. Then all the needles fall off. The trees I am referring to in this article were just standing there dead, gray just dead gray. I have never seen this color on trees that died out of dryness. I wanted to yell out to the world for such a crime that is slowly accruing right in front of us, yet we passively move along in our busy daily schedules accepting it all as part of life.

I was pondering those trees and their unjustified fate, realizing how nature a giant being who only knows how to give, and one we cant live without in its quiet way allows us to do all that we want, and even when we affect and destroy its parts, it is just silently being there, present in its glory. Yet the testimonial evidence of our misdoing, misuse, and abuse is so vividly there!

I ask, when are we going to finally wake up and say,
NO MORE!
NO MORE KILLING, NO MORE DESTROYING, NO MORE ABUSING, NO MORE IGNORING, NO MORE “ADVANCED” TECHNOLOGY THAT KILLS US ALL!!!
There are harmonious ways to live life on our beautiful planet earth!!! PEOPLE, WAKE UP!!!

[Ed. Note: Yael is the wife of this writer. We own no cell phones, as to do so would require cell towers, which we do not want in our neighborhood!]

“The head of a prominent cancer research institute issued an unprecedented warning to his faculty and staff Wednesday [July 23] : Limit cell phone use because of the possible risk of cancer.

The warning from Dr. Ronald B. Herberman, director of the University of Pittsburgh Cancer Institute, is contrary to numerous studies that don’t find a link between cancer and cell phone use, and a public lack of worry by the U.S. Food and Drug Administration.

Herberman is basing his alarm on early unpublished data. He says it takes too long to get answers from science and he believes people should take action now – especially when it comes to children.

“Really at the heart of my concern is that we shouldn’t wait for a definitive study to come out, but err on the side of being safe rather than sorry later,” Herberman said.

No other major academic cancer research institutions have sounded such an alarm about cell phone use. But Herberman’s advice is sure to raise concern among many cell phone users and especially parents….

The issue that concerns some scientists – though nowhere near a consensus – is electromagnetic radiation, especially its possible effects on children. It is not a major topic in conferences of brain specialists,” quoting the AP on CBS News.

[Ed. Note: This is the very first time an American university has issued a warning about cell phone use. The issue is electromagnetic radiation that is emitted not only from the phone into the brain of the user, yet also from the cell tower up to a radius of several hundred feet. In 2007, eminent researcher Carroll Cobbs wrote a Guest Entry for the Yelm Community Blog about cell tower radiation and the effects on living organisms.
Click here for that report.]