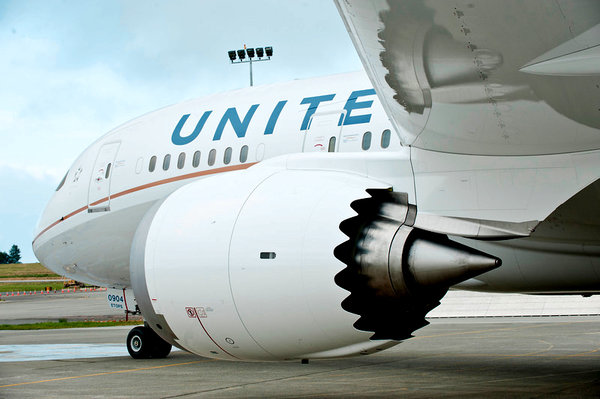 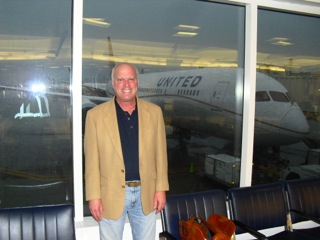 This writer was aboard United Airlines 787 Dreamliner from Houston to San Francisco seated in the forward BusinessFirst section on Tuesday, December 4, 2012. I was originally ticketed on the 787’s domestic USA inaugural from Houston to SFO on November 4, 2012, which was cancelled. Only the Newark to Chicago and Chicago to Houston roundtrips operated that day. My inaugural flight was rescheduled for November 9th, which I could not make. The one-month delay for me to reschedule could not dampen my enthusiasm to ride on this heralded 21st century aircraft, following my inaugural ride on the very first domestic Boeing 777 leaving from Washington-Dulles, to Chicago-O’Hare June 7, 1995, the continuation of the inaugural London-Heathrow – Dulles flight.

Being the first commercial airplane constructed mostly from composites, this aircraft uses 30% less fuel than other similar aircraft flying the same distances. Immediately on entry, one notices Boeings new 787 has roomier overhead bins that recess into the ceiling when closed, providing more head-room in the cabin, much larger windows, at-seat power for smartphones/laptops, a quieter cabin, more humid air and a much quieter lavatory toilet. Every seat has their own personal video screen with a multiple library of movies, TV & music programs.
Click here for the video of the 787 being towed to gate C-14 in Houston for the San Francisco to Houston trip.

Stephanie Rosenbloom of The New York Times commented on the major noticeable standout for passengers:
“LED lighting sets the mood for various phases of flight: ice bluish-purple for boarding; a dimmer version of that for cruising; deep purple for relaxing; copper during meals; dark, bat-cave blue for sleeping; and a warm blend to help wake passengers for landing. On long flights, the lighting can be used to simulate a full day to help combat jet lag.”
This provided an exceptional cabin experience.

These are a few of the published reviews of note:

– “Dreamliner Prepares To Take Off From DIA”
[Denver international Airport]
Read more and see the video from KCNC-CBS 4 in Denver. 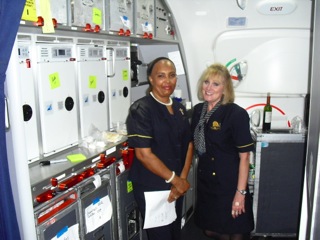 UAL crew in the 787 BusinessFirst Galley, ship 3906 – the wine in photo was terrific! 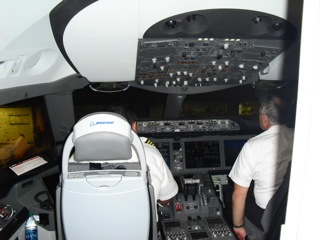 The pilots allowed a picture of the cockpit of the 787 Dreamliner, ship 3906

This writer in BusinessFirst’s full-flat seat 3A – notice the large windows, ship 3906

Ed. Note:
My aircraft, ship 3906 turned from the SFO arrival back to the “red-eye” to Houston and became the first scheduled inaugural flight to Denver on Wednesday, December 5, 2012.