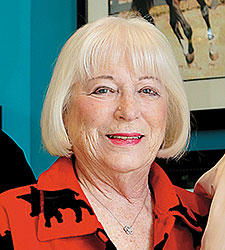 Klein was an accomplished equestrienne, former vice chairman of the board of the National Symphony Orchestra at The Kennedy Center for the Arts in Washington, D.C, former member of then-titled Kentucky Harness Racing Commission, former member the Louisville Zoo Commission, co-chair with her husband of the opening of Kentucky Center for the Arts (1983), and a civic benefactor. As a prominent owner and breeder in Kentucky who raced horses in partnership with her husband and son Richard, “the Kleins rank fourth in all-time documented wins at Churchill Downs with 148.”

The family would like to extend a thank you and gratitude to her doctors and her caregivers, especially Mittie Davis and Tinuke Maclu-Uboku (Tue-Tue).

– The July 31 passing of Elaine Klein was reported as follows:

– “Time For Old and New in Thoroughbred Racing”
By John Asher in The Voice-Tribune, a weekly newspaper in Louisville, Kentucky.
Read more , scroll down.

– “Saratoga notes: Windswept may be stakes bound after impressive win”
By David Grening in the Daily Racing Form.
Read more

– Update: July 20, 2015
“In the Age of the Miraculous: Miracles, Extraordinary Experiences, and Discoveries” a new book released today by Sophie Sykes includes the story of Elaine Klein, making herself known to her family after she passed. She lives on.
Read more