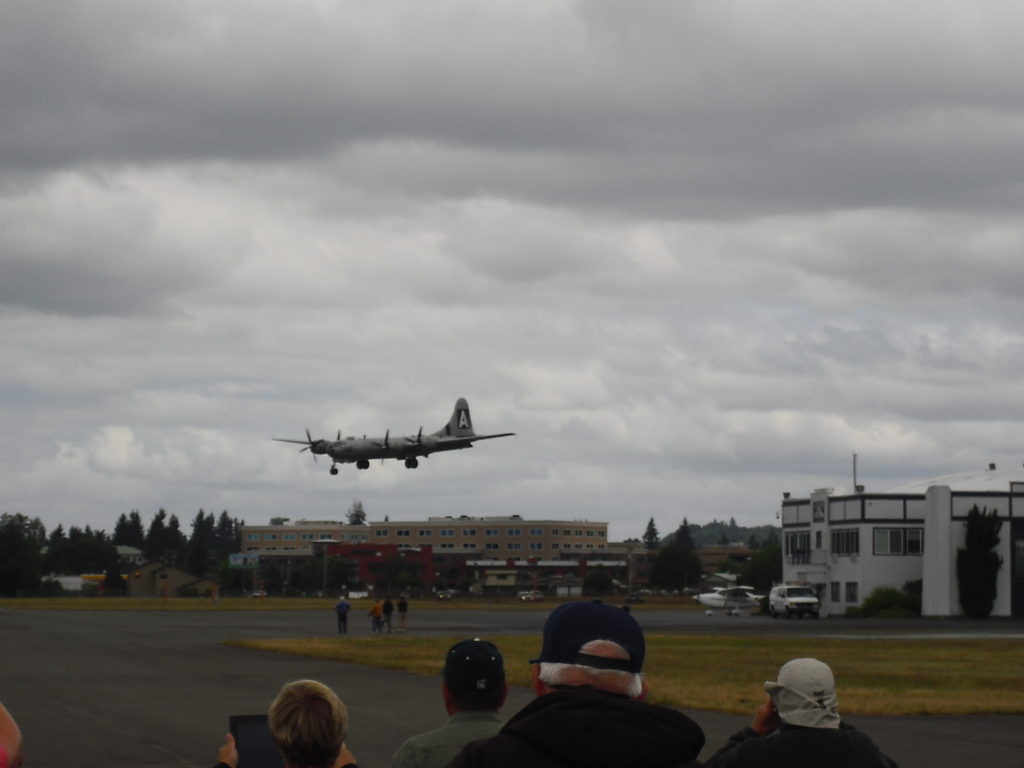 Yelm aviation enthusiast rides in B-29 Superfortress
Yelm area resident Steve Klein rode in the bombardier’s nose seat of the world’s only known, operational B-29 Superfortress, named Fifi on Tuesday, June 17. The 45 minute trip operated from Olympia Regional Airport on a flight-seeing tour as far south as Yelm’s Bald Hills, a flight rescheduled from Sunday due to a flat tire which occurred last weekend at the Olympia Air Show. Klein is an aviation enthusiast, having served in various management and executive capacities at Eastern Airlines (EAL) from 1976-1985 and Pacific Southwest Airlines (PSA) 1985-1986 and then as airline industry consultant from 1986-1988, prior to retiring to Yelm in Fall 1988.

The Olympia Air Show is sponsored by the Olympic Flight Museum, whose Executive Director Teri Thorning, and coordinator of the 16th annual event at Olympia Regional Airport said the B-29s appearance is a rarity.
“Its the only one flying the world,” she said. “How lucky are we to have that kind of asset here in Thurston County?”
How fortunate indeed, as the last time a B-29 called at Olympia was in 1945.
After Klein’s flight, Fifi flew to Boeing Field in Seattle, returning “home” to King County, as she rolled-off Boeing’s Assembly Line in Renton in July 1945.
The B-29 was instrumental in ending World War II in the Pacific Theater, as this aircraft type dropped the atomic bombs on Japan, and while destructive, saved countless thousands of lives that would have been lost if the war continued.
Click here for the video of her Seattle landing Tuesday afternoon. 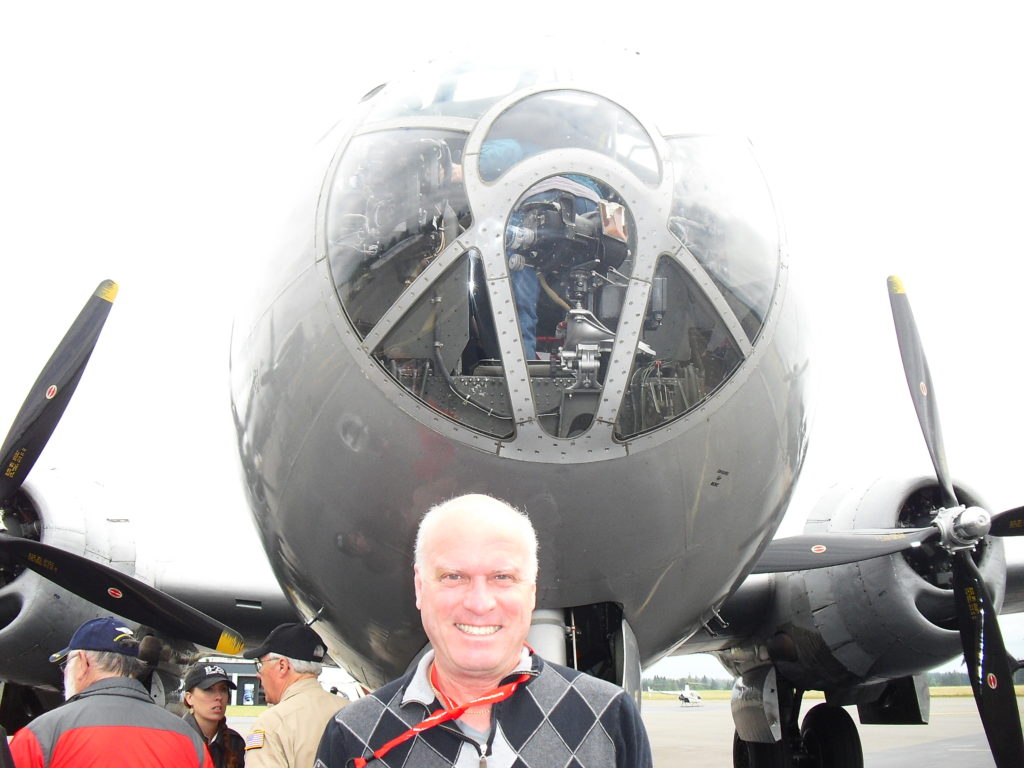 Klein was seated in the Bombardier’s position in the aircraft’s nose.

– Klein first got interested in preserving our nation’s aviation heritage when he was with Eastern Airlines in the mid-70’s, as employees raised funds to restore & donate an Eastern DC-3 for display at the Smithsonian Air & Space Museum, still hanging there to this day. He is a strong advocate for those organizations that work to restore and maintain these historical machines in flying condition for the education of our future generations.
Click here

– Klein is a former member and supporter of the Mid-Atlantic Air Museum in Reading, PA, which purchased a Martin 404 and restored her to flying condition as originally ordered by Eastern Airlines. He has flown on her twice:
Click here

– In recent years, Klein was a member of the Historical Flight Foundation providing financial support in the restoration and airworthiness of an historic Eastern Airlines Douglas DC-7B ship at Opa-Locka, Florida, north of Miami International Airport. While not yet having flown on her, Klein was given a personal tour on-ground of the fine work restoring this airplane.
Click here

– Klein is currently an active member of TIGHAR (pronounced tiger), the acronym for The International Group for Historic Aircraft Recovery, a non-profit foundation dedicated to promoting responsible aviation archaeology and historic preservation, currently engaged in locating the wreckage of Emilia Earhart’s and her navigator, Pan-Am’s Fred Noonan’s Lockheed Electra, a daring round-the-world-flight which was cut short when their flight disappeared over the Pacific Ocean on June 2, 1937..
Read more

Klein is host of the Yelm Community Blog.