However, long before Saturday’s contest, nine of Washington’s superdelegates, including the six Democratic members of Congress, two senators and Governor Jay Inslee, pledged their support to Clinton.

Unlike pledged delegates allocated proportionally based on caucus results, superdelegates can vote however they’d like at the Democratic National Convention.”

“Meanwhile, a petition circulating has amassed nearly 30,000 signatures as of Wednesday evening, and Sanders supporters have taken to social media to blast their representatives.”

“[A sample of] The pledges below are based on stated support.

Art Show in Yelm this Saturday evening, April 2 – OPEN TO THE PUBLIC

Local author, Bruce A. Smith, announced this week that his book, DB Cooper and the FBI – A Case Study of America’s Only Unsolved Skyjacking – has been published by CreateSpace, a division of Amazon.

Smith’s work is the first comprehensive study of this iconic crime that has baffled the FBI for over forty years. In 1971, a man known as DB Cooper hijacked a Northwest Orient 727 inbound to Seattle [from Portland, OR.], and after exchanging the passengers for $200,000 and four parachutes he parachuted into the rainy nights skies north of Portland. He has never been since and nothing was ever found of the skyjacking until a young boy uncovered $5,800 worth of ransom buried on a Columbia River beach eight years later. Adding to the intrigue, no one knows how the money got there or when.

However, Smith has discovered that sloppy police work is one of the reasons the case has not been resolved. In 2002, the FBI lost critical evidence, and now close examination of federal records reveal that their primary technical consultant on the case, Earl Cossey, lied to authorities. More troubling, DB Cooper had a 40-hour head start before anyone went looking for him in the woods near Amboy, WA. Flaws in the investigation abound, and besides examining how DB Cooper “Beat Da Man,” Smith’s book offers a glimpse into how law enforcement truly functions. It’s not a pretty picture – but it is a good read.

Amazon offers DB Cooper and the FBI – A Case Study of America’s Only Unsolved Skyjacking as a “print-on-demand’ book and is available for $25, plus shipping and handling, at: https://www.createspace.com/5817285. In addition, it will be available at area bookstores in mid-April, with at least one book signing anticipated at Lemuria in Yelm.

Smith is also the publisher of The Mountain News, an online news journal covering the communities of southern Pierce and eastern Thurston and Lewis counties.

Editor’s note:
The Yelm Community Blog was begun at the insistence of a supporter to my 2005 Yelm mayoral campaign, who said I had garnered so much knowledge in the year that I ran for mayor, that to just walk away would be a travesty to the community. I heard this supporter’s message and with his encouragement, began this Blog.

Thank you for your support.

Editor’s Note:
The almost 3 to 1 Sanders Caucus win in Washington State will force our state’s Super-Delegates to decide if they will stick with their endorsements of Hillary Clinton and vote with the Establishment, or vote with their constituents wishes, whom they represent!
This includes Governor Inslee, our Senators, and Congressional Representatives.
After serving as the Democrats Yelm Area Caucus Coordinator, I learned much and I agree with these assessments of our political system:

– “American elections ranked worst among Western democracies. Here’s why.”
“The 2015 annual Year in Election report compares the risks of flawed and failed elections, and looks at how well countries around the world meet international standards. The report gathers assessments from over 2,000 experts to evaluate the perceived integrity of all 180 national parliamentary and presidential contests held between July 1, 2012 to December 31, 2015 in 139 countries worldwide. These include 54 national elections held last year.

Forty experts were asked to assess each election by answering 49 questions The overall 100-point Perceptions of Electoral Integrity (PEI) index is constructed by summing up the responses.

This chart compares and contrasts the overall 100-point PEI index for all elections held since 2012 in the Western democracies covered in the survey. In the U.S., this covers both the 2012 presidential elections and the 2014 Congressional contests.

Americans often express pride in their democracy, yet the results indicate that domestic and international experts rate the U.S. elections as the worst among all Western democracies,” quoting The Conversation.
Read more

– “Can We Change the Political System? Strategic Lessons of the Bernie Sanders Campaign”
“Less than two months into the 2016 primary season, and in defiance of all expectations, it appears that Bernie Sanders has profoundly reconfigured the US political landscape. By relentlessly denouncing what he refers to as the United States’ “billionaire class” and its “rigged economy,” he has given voice to the mounting anger of millions of young and working-class Americans whose economic insecurity has intensified in the aftermath of the Great Recession of 2007-2008.”

“What then is the long-term significance of the Sanders campaign, and how can the left make the most of this opportunity and avoid the pitfalls encountered in other places and times?”

‘The “Rigged” Political System”
This thoughtful op-ed was written by Patrick Barrett, Truthout, and is a must-read!
Read more

– “The Mind-Boggling Story Of Our Arcane And Convoluted ‘Primary Politics’ : NPR”
“Author Elaine Kamarck explains superdelegates, the difference between caucuses and primaries, what happens in a brokered convention and how the rules of primaries can sometimes change,” quoting NPR.
Read more

That is the truth. People may be uncomfortable about hearing it, but that is the reality. And that is why what this campaign is about is saying loudly and clearly: It is not just about elected Bernie Sanders for president, it is about creating a grassroots political movement in this country.

– This quote from Winston Churchill puts all into perspective:
“Democracy is the worst form of government except for all those others that have been tried.”

With the recent closure of I-5 that forced traffic to detour around the JBLM incident via Yelm, thoroughly placing our town’s traffic in gridlock for hours, and Mayor Harding touting Bypass funding in his State of the City Address, this is a good time to provide a Yelm Bypass Phase 2 construction update:

– Lisa Pemberton penned this excellent story in The Olympian:
“Circus Arts puts teamwork in the center ring at Yelm school”

“Stilts, pogo sticks and unicycles have taken over the gym at Yelm Prairie Elementary School.

Welcome to Circus Arts, one of the most popular activities offered at the 530-student school.”

“Teacher LeighAnn Charlston began offering Circus Arts as part of PE classes when she arrived at the school about 15 years ago. Back then, she’d invite families in to watch students show off their balancing skills.

But then students began creating intricate, choreographed routines, she said. It’s now a big tradition at the school.”
Read more 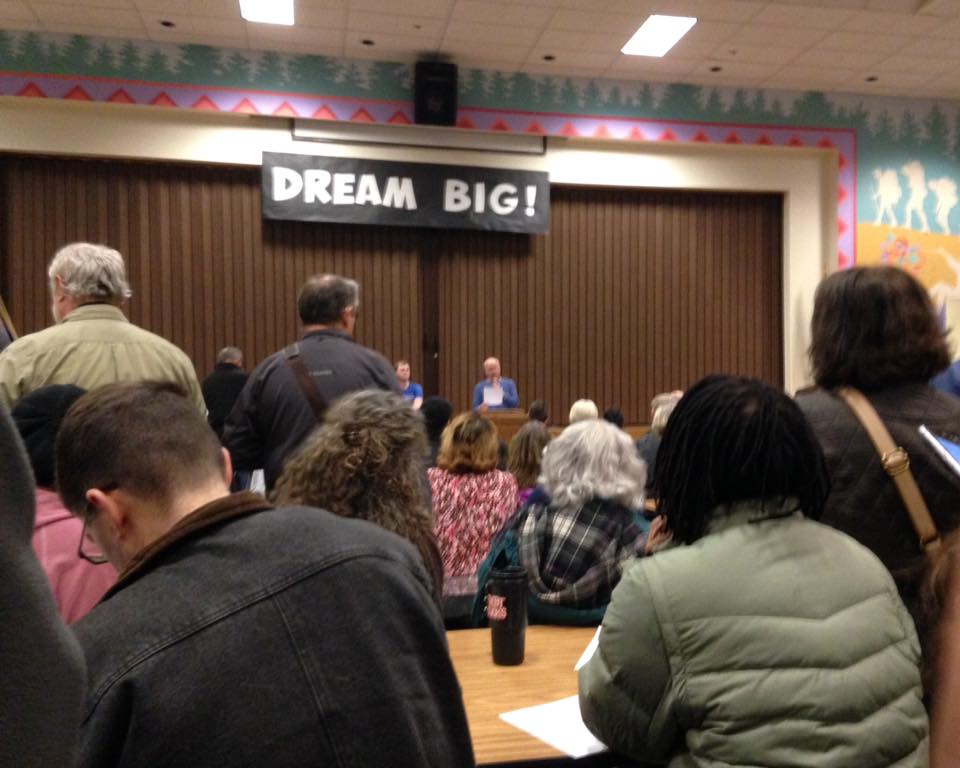 – Yelm precincts score historic turn-out to Caucus for their candidates
The excitement, passion and enthusiasm was palpable as voters from 17 Yelm-area precincts and 7 precincts in Pierce County (i.e. Roy, McKenna) gathered for the Democratic Caucus to select delegates for candidates Hillary Clinton and Bernie Sanders to be the party’s nominee for President of the United States. Steve Klein (this blog’s host) was the Democrats Area Caucus Coordinator (ACC) and convened the precincts at their designated tables approx. 10am. That provided an opportunity for voters and neighbors of those areas to introduce themselves to each other and get situated where they needed to be prior to the Caucus formally beginning at 10:30am.

Klein gave an opening welcome noting this Easter weekend is very apropos for the Washington Caucus, which represents the hope of Spring and a rebirth into a new future – and the interest in this Caucus is no different in our Presidential candidate selection. After leading the Caucus in the Pledge of Allegiance, Klein introduced Sonia Pena, Myra Pena and Zander Layden in a beautiful rendition of America The Beautiful, noting the talent we are so fortunate to have in our midst right here in Yelm. Klein asked for a show of hands of the 471 participants plus observers gathered as to how many were attending their first Caucus, which clearly reflected most all were, perhaps as many as 90% of the group [Ed. Note: Yelm caucuses usually get 50 participants]. Klein then read the rules and a letter from WA State Dems Chair Jaxon Ravens. Then Precinct Chairs were selected by each precinct collective, a Secretary and Tally Clerk chosen by the respective Precinct Chairs, and then the hall was filled with a cacophony of discussions about each candidate, the process, procedures, applause, cheers and excitement, all while maintaining civility, which was wonderful to observe. Klein referenced this is the democratic process at work right down to the grassroots level in our communities.

Once the precinct tallied their votes, designated their delegates and turned-in their packets to be counted, that precinct was adjourned and participants were free to leave. Most of the precincts had concluded their business by 12:30pm. Yelm designated 56 Sanders delegates and 7 Clinton delegates. The Yelm Caucus was complimented on being so organized by the people staffing the Hillary for President table, and added they had been traveling the country and had not seen such a large crowd handled so well!

“‘OK, are you ready for a news alert? We just won the state of Washington!’ Sanders told the crowd to cheers and applause. ‘That is what momentum is about.’

‘So don’t let anybody, don’t let anybody tell you we can’t win the nomination or win the general election — we’re going to do both of those things,’ Sanders said,” quoting Carrie Dann, NBC News.
Read more

Editor’s Note:
As Yelm’s Democratic Area Caucus Coordinator (ACC), I would like to extend my sincere thanks and deep appreciation for all of the volunteers who gave so freely and cheerfully of their time and energy, the Thurston County Democrats, and candidates’ volunteers. Also appreciate the assistance of Yelm Police Chief Todd Stancil sending Patrol Sergeant Adam Wood to oversee the traffic flow on arterial streets, and Yelm School’s Superintendent Andy Wolf and his staff in the District Office (Lisa) and at Yelm Middle School (Paul and Suzanne) for insuring the facility was properly set-up for such a large group. Everyone was fantastic. – Steve Klein

Michael Savoca was an advisor to the Campaign for Mayor of Yelm by Steve Klein in 2005.

Thurston County Trails in the news – reaches a milestone

The Hub Junction Project was celebrated Thursday [March 17] at the intersection of the Olympia Woodland Trail and Chehalis-Western Trail.

The project caps the latest triumph in a multi-jurisdictional effort to connect the county’s trails for bicylists and pedestrians. Located near the Lacey-Olympia border, the roundabout contains wayfinding signage and trail history along with seating for visitors.”

Join Commissioner Romero for her Coffee Chats –
Monday, March 28, OPEN TO THE PUBLIC! Bryan will be joined by PSE’s Thurston Municipal Liaison Manager, Amy Tousley; their Thurston Community Service Coordinator, Risha Sanderson; and their Major Projects Manager, Shane Richards. The four representatives will provide information and answer questions about the company’s many services and incentives to help its customers save energy and money.

Commissioner Romero meets once a month with citizens for informal coffee chats on a wide variety of local issues. At the end of the guest presentation you will have an opportunity to talk about issues of concern, ask her questions about the county, and share ideas. Romero is the representative of District 2, which includes Yelm, Lacey, and Rainier.

– Puget Sound Energy announced they will fund a retirement account of the two oldest and dirtiest coal-fired power plant units in the Northwest.
Read more