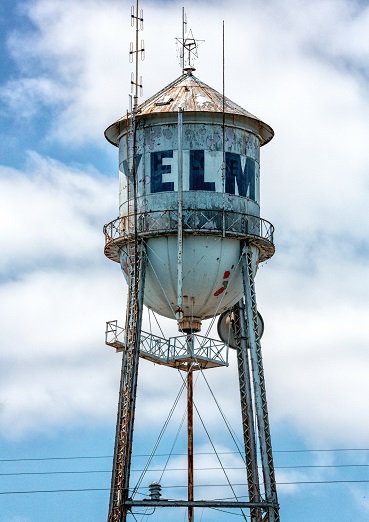 Republished from the Yelm Business Assn. (YBA). Used with permission.

– The Yelm Water Tower Historic Preservation Project was initiated by the YBA Board
Yelm’s water tower now in first step towards funding preservation.
The Historic Landmark designation of Yelm’s water tower opens the way for for state funding eligibility of renovations.

The Yelm Water Tower Historic Preservation Project was initiated by the Board of the Yelm Business Assn. (YBA), who concluded a separate non-profit entity was necessary to move forward. YBA Vice President Steve Craig resigned from the organization to pursue and form an exploratory committee of local leaders to accomplish this task, which the YBA endorses and supports.

Craig began the process of obtaining 501(c)3 non-profit status to accept public donations and be in a position to utilize additional fundraising opportunities by forming an exploratory committee under the name “Save the Yelm Water Tower.” Members of this group have met twice, which is comprised of Craig, Barrie Wilcox, Margaret Clapp, Beverly Vines-Haines, EJ Curry, Tim Larsen and Steve Klein. Craig said, “The Yelm Water Tower is the first water tower in the state to have this historical designation. I attended the meeting of the Governor’s Council on Historic Preservation and witnessed the unanimous vote taken by the council approving it. A formal presentation will be made at an upcoming Yelm City Council meeting.”

YBA President Cynthia Schmier said this, “Congratulations to Steve Craig and the Save the Yelm Water Tower Committee. The YBA Board acknowledges the committee for their efforts and achievement in the preservation of a Yelm treasure.”

The seven-member council generally meets three times annually at various locations across the state. Their work is to review and approve selected nominations to either the Washington Heritage Register or the National Register of Historic Places, or both.”

“In Yelm, the historic city water tower, dating to 1946, made the state register,” by Bob Valen, The Star, Grand Coulee, WA.
Read more