– About Us
Welcome to Washington Trails Association (WTA), the voice for hikers in Washington state. We protect hiking trails and wild lands, take volunteers out to maintain trails, and promote hiking as a healthy, fun way to explore the outdoors.

– Hiking Guide
WTA’s hiking guide is the most comprehensive database of hikes in Washington, and comprises content from eight guidebooks, user submitted info, and data compiled by WTA.
Read more

Story Highlights
* Kayak Nisqually, a south Puget Sound eco-tourism company, offers various tour options,
* All skill-sets welcome – you do not have to be an experienced kayaker,
* Owner-operator Sam Kaviar is a dedicated biologist and experienced sea kayaker,
* Tours feature paddles near wildlife, dynamic scenery around the Nisqually Delta.
* No better way to experience the marvels of our region than on the water’s surface.

– Editor’s note:
I had first read about Kayak Nisqually featured in the Nisqually Valley News on August 10, followed by reporter Andrew Kollar’s experience published the following week. The week after Labor Day, I was off on a long-planned trip with friends canoeing/portaging/camping in the Boundary Waters Canoe Area Wilderness (BWCA) within the Superior National Forest on Minnesota’s famed North Shore of Lake Superior, visiting there for the first time in almost 15 years. After being uplifted and inspired from this retreat in Mother Nature, so elated was I to return home to a featured story on Kayak Nisqually in Thurston Talk published September 18, that my wife and I booked a half day tour for September 28th, rain or shine. Of course, yesterday was the hottest September 28th on-record, with clear skies and a mirror-glass surface on Puget Sound.

We met at the assigned location, the boat-ramp adjacent the Nisqually Reach Nature Center north of Lacey, where we met Kayak Nisqually owner/operator Sam Kaviar, who we discovered is from my hometown, Louisville, KY. After a very thorough technique demonstration, we were ready to go for our paddle. Kayaking is very different from canoeing in that one must paddle and turn the boat opposite of the methods used in canoeing. I likened the experience to driving on the left side of the road overseas. The 2 1/2 hour trip passed by way too fast, yet we left with wonderful experiences viewing birds, seals, and the beauty of the Olympics and Mt. Rainier. We’re looking forward to our next tour on the South Sound with Sam during the misty, rainy Autumn.
What an outstanding kayaking tour guide!

TELL SAM YOU READ ABOUT KAYAK NISQUALLY ON THE YELM COMMUNITY BLOG! 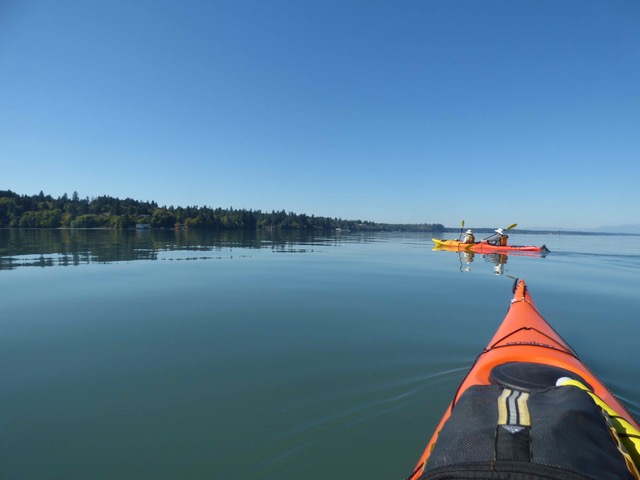 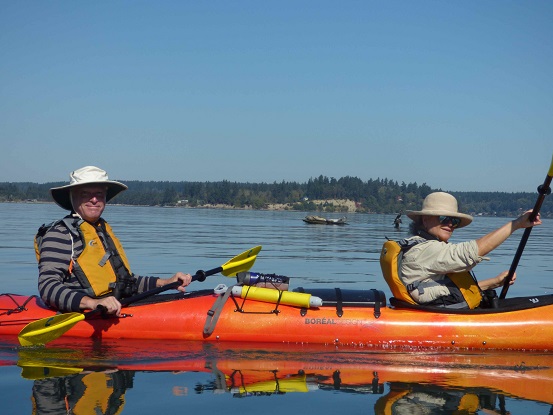 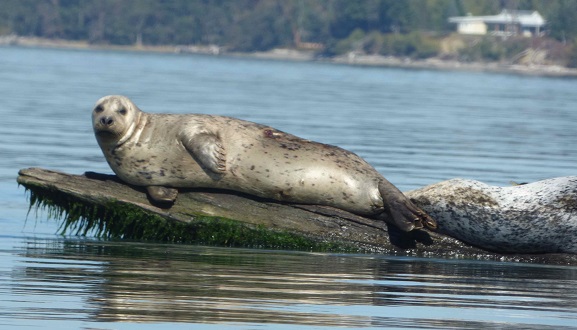 Where is the City of Yelm government directing this town? Only Mayoral candidate/Councilor DePinto stood-up for property owners last night. Council draws ‘red line’ that major revenue sources will be from taxes/fees. Revenue stream from taxes/fees NOT sustainable in this bedroom community!

– Story Highlights:
* WHERE IS YELM HEADED?
* HOW MUCH MORE CAN CITY RESIDENTS AFFORD IN COUNCIL ADDING TAXES/FEES?
* FROM 2005-2015, HOUSING DEVELOPMENTS CHOSEN OVER DIVERSIFYING ECONOMY.
* MORE TAXES/FEES ON RESIDENTS IS NOT SUSTAINABLE IN A BEDROOM COMMUNITY!
* The public was omitted from being involved in an added REET taxation last night.
* While the council has the RCW authority to tax, disingenuous omitting the public.
* Public not told about other revenue-producing alternatives examined before taxing?
* Storm-water rate increases already approved, water/sewer increases looming.
* All of this on top of an important schools bond in February.
* Yelm’s City Council approved a REET (Real Estate Excise Tax) on property sellers,
* The .25% tax would equate to $700 on a $280,000 property sales price.
* This is an addition to the county’s excise tax.
* The Council was told only Yelm & Rainier do not have this tax in the county.
* Why did the Council not seek public input from Yelm Real Estate Agents?
* Why did the Council not seek constituents’ input in a Public Hearing?
* The Council majority urged this to pass to raise city revenue,
* Only Councilor DePinto urged a “no” vote, said “enough is enough” taxing constituents.

At last night’s Yelm City Council session, councilors were presented with voting on Ordinance No. 1030, a REET (Real Estate Excise Tax) on all city of Yelm property sellers. There was no public comment period nor public discourse with local real estate agents on this tax. As was the case last night, public comments are not permitted on an item that is on that council agenda, nor at a previous council session having this on that agenda, nor the council’s study session. Therefore, no opportunity was provided for public comment addressing the council personally and on-the-record all three times this has been on the council’s agendas.

Only Mayoral candidate/Councilor Joe DePinto urged the council to vote against this ordinance. DePinto said there should not only be taxes and fees from which to raise revenue, that other sources need to be examined such an economic growth. DePinto said, “enough is enough.”

Other Councilors including Carmody, Littlefield, and Stillwell all spoke in favor of this tax as a vehicle to fund the city’s infrastructure crisis: roads, water, sewer, storm-water systems. Littlefield also referenced the coming schools bond. Carmody differed with DePinto, adding the economy can’t grow without getting money to fix these city services. Stillwell said he spoke to real estate agents who said this tax was not an issue, though no names were mentioned.

– From the Washington Research Council (1993) on REETs in Washington State.
“Revenue generated by the tax is to be used by these local governments solely for financing the capital projects specified in the capital facilities portions of their comprehensive plans. Cities and counties that choose, but are not required, to plan under GMA may also impose the tax, but only with voter approval.”
Read more

– UPDATE: October 5, 2017
I was not clear about the provisions in the RCW, as I ascertained there was a provision about public involvement in REET II, which was verified in a call to Thurston County Commissioner Gary Edwards’ office. REET II can be authorized by the municipality (Yelm’s City Council), rand the tax revenue can ONLY be spent on infrastructure improvements, that was correctly mentioned to the council. However, the difference between REET I and REET II is that the public can repeal a REET II via a referendum if put to a public vote, which was omitted to the council.

Editor’s Note:
Councilors Carmody, Littlefield, Stillwell mentioned funding city infrastructure projects by this tax.
If so, requiring voter approval should be verified so the city is not compromised!

– Bottom line:
* The focus should not be solely on the passage of this REET.

* Where is the public outrage they were omitted from a public hearing on another tax?
While the council has RCW’s authority to tax, disingenuous omitting the public!

* Why were Yelm Real Estate Agents not brought in for comments to educate councilors?

* Why were other revenue-producing alternatives examined not presented, if at all?

* City Council should vote to hire a consultant on learning to raise revenue elsewhere.

* Sept. 26 will now be known for Yelm Council’s ‘red line’ that taxes/fees will be primarily used to raise revenue on the backs of their constituents, property owners, and residents.

* Is this what Yelm residents want for another 4 years?

* Voters in Yelm city limits can vote for change this November!

‘Doctors Without Borders’ Exhibition coming to Seattle –Plan your visit Oct. 2-8 to the Free Interactive Exhibition

– “Plan Your Visit”
“Forced From Home is a free, interactive tour that takes you behind the headlines about the refugee crisis. Guided by experienced Doctors Without Borders/Médecins Sans Frontières (MSF) aid workers, you’ll travel through a 10,000-square-foot space designed to convey the challenges facing a person forced to flee.
Visitors experience virtual reality and 360˚ video, and interact with materials gathered from refugee camps, sea rescue missions, and emergency medical projects around the world. Forced From Home is fully-accessible and open to the public. The one hour tour provides a unique educational experience for adults and children (ages 12+),” from Doctors Without Borders.

In Seattle for one week only. Don’t miss this unique interactive exhibition.
Read more

Click here for a map of the Seattle event.

Along with that hard work, the watershed has also celebrated. For 28 years, the Nisqually Watershed Festival has been celebrating Nisqually’s history and culture. The festival is a free, daylong event featuring art, discovery, music, and a whole lot of family fun,” by Northwest Indian Fisheries Commission in Thurston Talk.
Read more

On Monday, September 11th, the Yelm City Council, Mayor and city Staff received a sobering report from fee consulting agency FCS Group’s two financial experts. They presented their recommendations for a gradual funding of Yelm’s water and sewer operation and infrastructure beginning in 2018 and spanning 5 years.

– From the City of Yelm Study Session Minutes of September 11th
“Principal Angie Sanchez and Project Manager Sergey Tarasov from FCS Consulting Group gave a presentation on water, sewer rates and Sewer System Development charges. They discussed operating and maintenance costs, capital costs, existing debt obligation, growth rate projections, financial policies and targets to meet the needs of Yelm. They presented information and rate studies that would allow for capital improvements in each utility. They also provided information for the council to decide the level of services and debt obligations versus rate increases and the future needs for upgraded facilities and employees to operate these facilities. The Council discussed different scenarios for utilities. Grant opportunities will be explored to mitigate any rate increases. This discussion will keep moving forward and will come back to Council at a future Study Session.
Councilmember Carmody would like to discuss late fees and utility bills. Mayor Foster stated this issue will be researched by the new Finance Director and a recommendation will be brought to council in the near future.”
Read more

Sanchez responded, “You’re still catching up in terms of system reinvestment. You are currently not even funding depreciation at this time.”

– From AAA Washington:
Soap For Hope 10h Annual Toiletries Donation Drive
AAA Washington is collecting unused shampoo, soap, toothbrushes, deodorant, and other toiletries to benefit the needy in our community.

Overwhelming Community Support
Soap for Hope is the annual toiletry donation program that helps our neighbors in need by supplying them with valuable personal hygiene items.

Thanks to the generous help of our members, the community and partnering organizations, AAA Washington has redistributed more than 850,000 personal hygiene items to local charities throughout Washington and northern Idaho. Help us reach one million donations this year and have a positive impact on your local community.

Our AAA stores have each selected a local charity, food bank or shelter to receive these items, so your donations stay in your community and serve your neighbors in need. Our locations have selected the following charities to receive their Soap for Hope donations in 2017.
[In Thurston County]
* Olympia – YWCA Other Bank & Tumwater School District
Read more

– “Nisqually tribe’s annual salmon giveaway starts Tuesday”
“The tribe’s Clear Creek Hatchery releases millions of chinook smolts, or young salmon, each year. They return as adults in the fall a few years later to die. Before they do, the eggs and sperm are harvested and then the fish are given away.”

“The fish will be given away from 8 a.m. to noon Tuesday [Sept. 26] as well as Oct. 3 and Oct. 10. Fish will be given out one at a time; to get more than one, you’ll have to go to the back of the line.
For directions to the hatchery, go to Joint Base Lewis-McChord’s main gate (Interstate 5’s exit 120) or east gate (on East Gate Drive off Route 507),” By Abby Spegman, The Olympian.
Read more