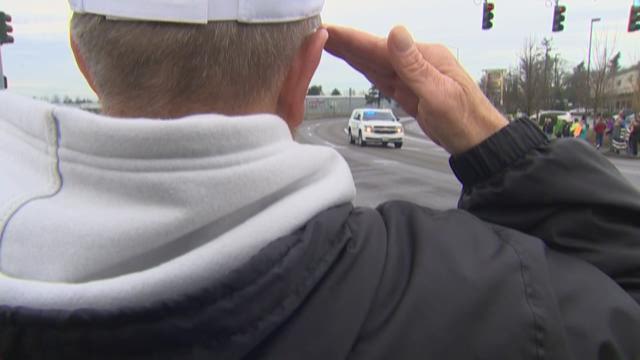 – “Locals pay respects to fallen officer Daniel McCartney”
“Among the estimated 1,500 law enforcement personnel and others who attended the service for slain Pierce County Deputy Daniel McCartney, the former Hoquiam Police Department officer killed in the line of duty Jan. 8, were Hoquiam Police Chief Jeff Myers and Aberdeen pastor Doug Cotton, who shared their memories of the father of three.

“‘Daniel was one of God’s modern day heroes,’ said Cotton. ‘You become a hero when you do something with every ounce of your heart, soul and body, and those efforts make a difference to somebody else. Daniel did that, as a law officer, a father and husband.'”

“‘I think Daniel would tell us that heroes are often developed in obscurity, be it on a ship in the Navy, or in places like Aberdeen, Hoquiam, Montesano or Yelm,’ said Cotton. ‘Heroes are not made by quitting when things get hard. He was anything but a quitter. He was 100 percent into everything he did,'” by Dan Hammock, The Daily World, Aberdeen.
Read more