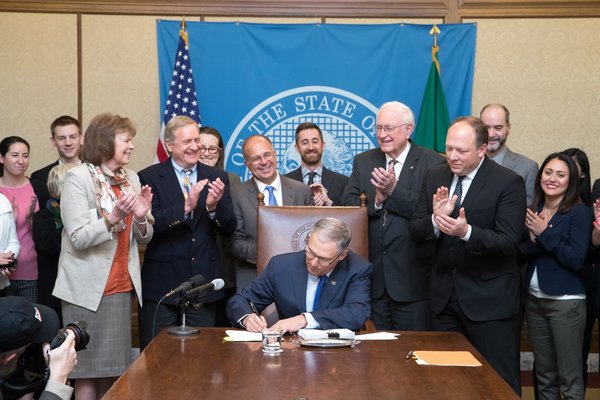 – “First bills of the session wrap up two big issues from last year:
construction budget and water rights bill”
“‘It is good news for Washingtonians that the Legislature passed the long-overdue construction budget,’ Inslee said at the bill signing last Friday [Jan. 20]. ‘This allows us to restart hundreds of stalled projects at schools and mental health facilities and build more affordable housing ̶ as well as put thousands of Washingtonians to work.’

The Legislature was unable to agree on a water bill during the 2017 session and continued negotiations over the interim, reaching a compromise last week. The two-year construction budget should have also passed last session but it got caught up in the unrelated water rights dispute.

‘While far from perfect, this bill helps protect water resources while providing water for families in rural Washington,’ Inslee said. ‘It includes significant funding for habitat protection and restoration and other improvements that will be guided by local stakeholders and tribes according to the needs of each basin. Despite this positive step, pressures on stream flows and salmon will continue to mount in the face of climate change and growing demand for water,'” quoting the news release from the Office of Gov. Jay Inslee.
Read more

“The Washington Legislature today [Jan. 19] passed a sweeping permit-exempt well bill (SB 6091, the “Hirst fix”) that will have dire consequences for Washington’s endangered salmon and the people who depend on them. Most of our state’s rivers and streams are already imperiled due to low streamflows. It is well-established that pumping groundwater, including unregulated water withdrawals by “permit-exempt” wells, reduces streamflow. Rural development using permit-exempt wells has been happening at an accelerating pace, taking more and more water from streams and other senior users.”

“‘The best habitat in the world is worthless if there is not enough water in the streams,’ said Dan Von Seggern, staff attorney for CELP. ‘As mitigation water becomes harder to find, it is inevitable that “out-of-kind” mitigation will become the path of least resistance. Ecology needs to live up to its obligation to protect instream resources by carefully monitoring the watershed committees and the “offset” schemes they develop.’

“‘We are disappointed in leadership in the Legislature that has allowed the capital budget to be held hostage to an issue that has nothing to do with the budget. This agreement will harm fish, senior water right holders, and tribes. We expected better,’ said Trish Rolfe, CELP’s Executive Director.”
Read more