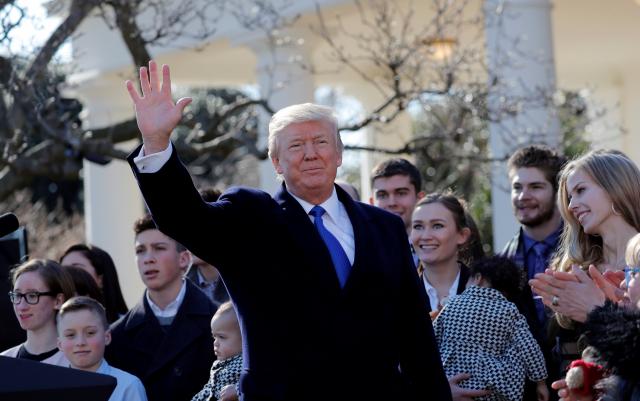 – Editor’s Note:
President Trump no longer has credibility to blame Obama or any other former predecessor for spying on Americans, when he just authorized the same, only now more sophisticated than ever! The NSA collects data on everyone including Presidents from nations worldwide – now using advanced voice recognition software:

“Finding Your Voice:
“Forget About Siri and Alexa — When It Comes to Voice Identification, the ‘NSA Reigns Supreme'”
Click here for the technological advancements in spying, by Ava Kofman, The Intercept.

And why does Trump not use his bully pulpit as President righteously to call in Congressional leaders and tell them they will not leave The White House until a budget deal is agreed. After all, he calls himself “The Deal Maker,” well show us your stuff, Mr. President!

The law renews for six years and with minimal changes the National Security Agency (NSA) program, which gathers information from foreigners overseas but incidentally collects an unknown amount of communications belonging to Americans,” by Dustin Volz, Reuters.
Read more

From the ACLU before Trump’s re-authorization:
“The Intelligence Committee memo about government surveillance abuses should have been made public and given to members of Congress before the FISA Section 702 vote. Trump must veto the bill so there can be a real debate on these powers.”

From Edward Snowden before Trump signed the re-authorization:
“Officials confirm there’s a secret report showing abuses of spy law Congress voted to reauthorize this week. If this memo had been known prior to the vote, FISA reauth would have failed. These abuses must be made public, and @realDonaldTrump should send the bill back with a veto.”

– Editor’s note:
Now why is this NSA action not a surprise, and their explanation regretting their failure lame?

– “NSA deleted surveillance data it pledged to preserve”
“The agency tells a federal judge that it is investigating and ‘sincerely regrets its failure.'”

“Since 2007, the NSA has been under court orders to preserve data about certain of its surveillance efforts that came under legal attack following disclosures that President George W. Bush ordered warrantless wiretapping of international communications after the 2001 terrorist attacks on the U.S. In addition, the agency has made a series of representations in court over the years about how it is complying with its duties,” by Josh Gertstein, Politico.
Read more