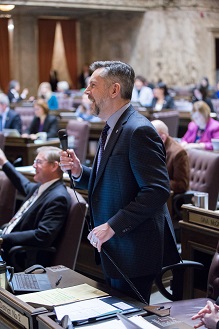 – From the AWC media announcement:
“The Association of Washington Cities (AWC), an Olympia-based organization advocating on behalf of Washington’s 281 cities and towns, announced the recipients of its fourth annual City Champion Award. The award acknowledges the hard work and dedication of legislators who championed critical city issues during the 2017 legislative session.”

“Rep. Nicole Macri (D-Seattle) and Rep. Andrew Barkis (R-Olympia) are recognized for their advocacy for and efforts to increase the availability of affordable housing in a variety of situations and communities.”
Read more