Hopes for a Yelm Costco dim from other online behemoths’ sales, As warehouse clubs growth reverses in 2017, the days of large retail construction comes to an end. 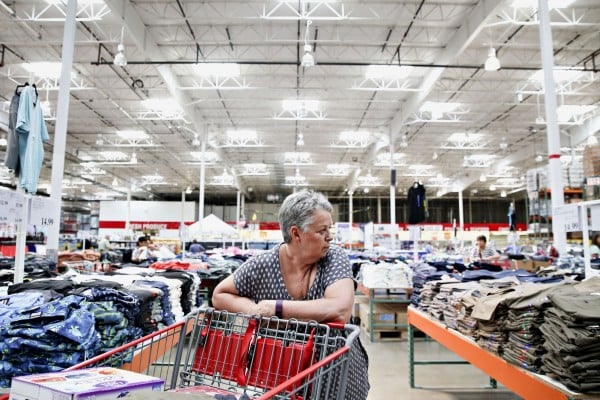 “At traditional wholesale clubs like Costco and Sam’s Club,
the demographic skews older, with baby boomers and seniors
making up the majority of members,” quoting the WAPO.
Photo credit: Daniel Acker/Bloomberg

Story highlights
* While are residents want a Costco, the potential for that has dimmed,
* Warehouse retailers slowest to shift their business online,
* Warehouse clubs cut an avg. of 2,500 job per month in 2017,
* Sam Clubs closing 63 stores, including 3 in Puget Sound,
* Online sales expected to continue phenomenal growth among millenials.
Editor’s note: the chances of a warehouse retailer now coming to Yelm are slim.

– “Will millennials kill Costco?”
“Warehouse clubs such as Costco, Sam’s Club and BJ’s Wholesale Club have for decades been an American staple: a place where families can stock up on bulk items, try free samples and spend the better part of a weekend morning meandering through aisles filled with 26-packs of canned salmon and king-size mattresses. But as more of Americans’ buying shifts online, some retail analysts say warehouse clubs may largely be left behind.”

“Warehouse retailers, she added, have been among the slowest to shift their business online, offer home delivery or make other sweeping changes to compete with the likes of Amazon.com. (Jeffrey P. Bezos, the founder and chief executive of Amazon, owns The Washington Post.)”

“There are signs that the sector is falling behind: Warehouse clubs and supercenters cut an average of 2,500 jobs each month in 2017, reversing a longtime trend of steady growth, according to a Post analysis of Labor Department data,” by Abha Bhattarai, The Washington Post (WAPO).
Read more