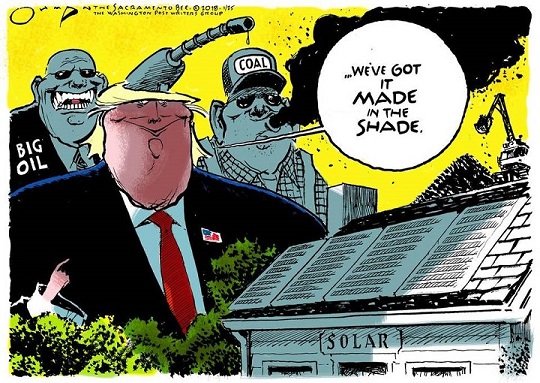 – Editor’s note:
Whatever happened to “drain the swamp?”
Trump takes America back to the past with coal, oil, and nuclear support.
This while wind energy accelerates in Lewis County.
Solar, wind, and other renewables are the future!

His 30 percent tariff announced Monday [Jan. 22] on solar panel imports from nearly every country around the world deals a major blow to the clean energy industry in the United States. It will cost thousands of jobs here — installation is the big job creator in this industry, not manufacturing — and it will raise costs of solar for California homeowners and utilities.

All so the president can further line the pockets of oil and coal tycoons whose industries pollute the environment and deplete the finite supply of fossil fuels.”

“Say this for Trump: He is consistent. The president yanked the United States out of the Paris Climate Accord last summer, giving us the dubious distinction of being one of only two countries (the other is Syria) rejecting a goal of reducing carbon emissions. He has opened vast new areas to oil, gas and coal extraction, rolled back regulations on power plant emissions and initiated tax reforms that damage solar and wind financing,” quoting The San Jose, CA Mercury News Editorial.
Read more