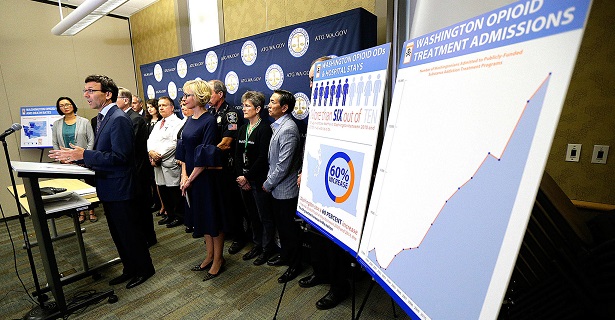 “While the unredacted complaint focuses most intensely on some Everett health care providers, it also provides details about how OxyContin prescriptions grew around the state, including in Arlington, Olympia, Yelm, Shoreline, Richland, Bremerton and Port Angeles,” by Scott North, Everett Herald.
Read more

– UPDATE: January 9, 2018
“More People Killed From Opioids Than Leading Diseases”
Story at-a-glance
* Since 1999, the rate of drug overdose deaths has tripled in the U.S., rising to 63,600 deaths in 2016
* The majority of the overdose deaths — 66 percent — involved opioids, a class of drugs so addictive and dangerous that the opioid epidemic was declared a public health emergency in 2017
* Drug overdose deaths from opioids totaled 42,249 in 2016, which is over 1,000 more deaths than were caused by breast cancer that same year
* Drug distributors, including the largest drug company in the U.S., McKesson Corp., seemingly looked the other way while shipping massive amounts of opioids to pharmacies supplying drug rings, and received only a slap on the wrist as punishment
By Dr. Mercola.
Read more