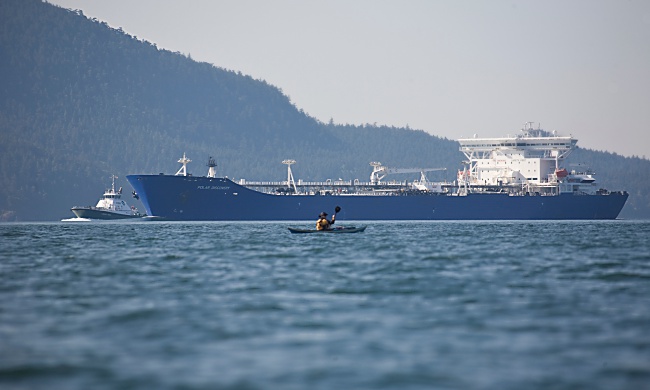 “Communities throughout the Northwest, often led by Native American tribes,
have been stopping one project after another.” Photo by Joel Rogers/Getty Images.

– Editor’s Note:
Washingtonians do not want oil-by-rail in our ports and now, led by Gov. Inslee, have requested our state be exempted from the Trump Administration’s plans to open our coastal waters to offshore drilling.

“The state agency in charge of reviewing the application voted unanimously to oppose the terminal—a vote that could spell the end of the project.
First proposed in 2013 by Vancouver Energy, the terminal would have been built along the Columbia River in Vancouver, Washington; 360,000 barrels of oil a day were to be brought by rail and then loaded on ships for transport to West Coast refineries. But the project quickly ran into local opposition,” by Sarah van Gelder, YES! Magazine.
Read more

“The World Bank will end its financial support for oil and gas extraction within the next two years in response to the growing threat posed by climate change,” by Larry Elliott Economics editor, UK’s The Guardian.
Read more

“Gov. Jay Inslee today [Jan 9th] delivered his 2018 State of the State address, a speech that highlighted Washington’s strong economy and best-in-the-nation business climate saying ‘our economy is strong, our future is bright, but there are always new heights to reach, new challenges to overcome and persistent wrongs to right,'” from the Washington State Governor’s Office.
Read more