– Story highlights
* WNPA joined lawsuit against Legislature in calls for more transparency,
* NVN’s Wagar is incoming WNPA President,
* Wagar’s NVN should also be more aggressive in transparency.
* NVN published admitted and uncorroborated “rumors” compromising their credibility.
* NVN admittedly believed Foster would easily win and retain his seat declaring him winner 2 days after the election, yet was too close to call until certification, again compromising their credibility.

The Washington Newspaper Publishers Association (WNPA) Board of Directors is currently comprised of 1st Vice-President Michael Wagar, who is Publisher/Editor of member newspaper, the Nisqually Valley News. Wagar is also the incoming WNPA board president. In filing a lawsuit against the Legislature for public records access, the WNPA is joined along with the Associated Press, public radio’s Northwest News Network, KING-TV, KIRO 7, Allied Daily Newspapers of Washington, The Spokesman-Review, Sound Publishing, Tacoma News Inc. and The Seattle Times.

The Nisqually Valley News published an Op-Ed December 14, 2017 titled:
“It Is Time for Legislature to Embrace Transparency”
Click here 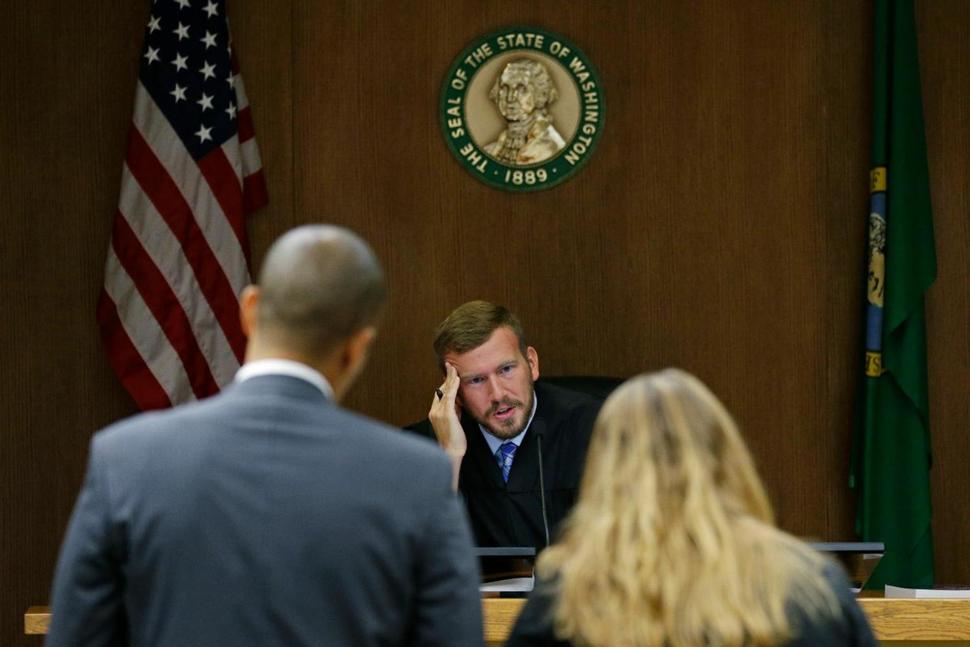 “Judge Chris Lanese talks with attorneys during a scheduling hearing
in Thurston County Superior Court in Olympia, Wash., for a lawsuit against
the Washington Legislature brought by a coalition of news organizations,
and led by The Associated Press, on Friday, Oct. 6, 2017. The suit challenges
lawmakers’ claim that the state’s public records law excludes them from stricter
disclosure rules that apply to other elected officials and agencies.
Photo credit: AP Photo/Ted S. Warren in U.S. News & World Report

– Editor’s Note, an Op-Ed:
While I support the lawsuit touting the Legislature to embrace transparency, Mr. Wagar must also be more aggressively transparent at the Nisqually Valley News, as he begins his 6th year at the newspaper’s helm.

The last year saw the publication be less than transparent:
1. The NVN published “rumored” stories without fact-checking.
Any Journalism 101 class teaches that a reporter should verify their stories with either:
1. the person referenced or their publicist and quote them, or
2. a minimum of at least 2-3 sources to corroborate “rumored” information.
Not with this newspaper, as they published admitted “rumored” information:
A. with a nonfactual report about me without contacting me nor fact-checking,
B. about a Lincoln Navigator commercial being filmed in Roy, WA. because there were “rumors” Salma Hayek and/or Matthew McConaughey facilitated this being videoed here since they own property in the area. A phone call to the Lincoln Motor Co. publicist could have verified the “rumors.”
The newspaper publishing uncorroborated rumors on multiple stories puts their credibility in a compromising position.

2. The mayoral election coverage was heavy-handed towards JW Foster.
The NVN should have just officially endorsed Foster for Mayor.
The Olympian Editorial Board, other area newspapers and this Blog all officially endorsed candidates.
Publishing the opinions of his newspaper’s correspondent reporter twice in the Question of the Week supporting Foster for mayor before the election was an unofficial newspaper endorsement that was not in the spirit of transparency or professionalism. There are 4,485 registered voters in Yelm, so why not publish more of their views, rather than a non-Yelm resident voter? And the Nisqually Valley News admittedly believed Foster would easily win and retain his seat, with the newspaper intertwining their own opinions by projecting results prematurely. Yet this race was too close to call until the day before the election was certified, where DePinto strongly challenged the incumbent Foster, losing by only 14 votes.
The newspaper declaring Foster the winner 2 days after the election and so early in such a close race put their credibility in a compromising position.

– Bottom line:
While the WNPA fights in court alongside other prestigious news organizations for Legislative transparency, the incoming WNPA Board President should require his reporters to be more transparent, instead of NVN readers continuing to be beset with rumors, hearsay, and innuendo, and especially in elections reporting.

– UPDATE: January 4, 2018
Now the Nisqually Valley News has taken their newspaper to a new low by lifting comments off a private individual’s Facebook pages, without crediting the source of the material – Yelm attorney Dan Crowe’s personal Facebook page.
I contacted Dan Crowe to ask if he gave permission, and he was never asked by the newspaper, so did not.
Read more