YBA presented balance of funds to Experience Olympia & Beyond 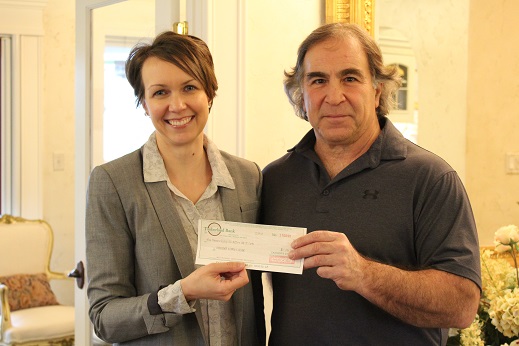 This story is reprinted here with permission from the Yelm Business Assn. (YBA).

– Yelm Business Assn. (YBA) donated balance of funds to Experience Olympia and Beyond
On December 5, 2017, the Yelm Business Assn. (YBA) Board of Directors officially announced they voted to dissolve the organization. Quoting the YBA Media Release, “While there was broad community support for the work of the YBA, the challenges of getting members to join the board or volunteer on the various committees has brought a halt to the YBA Strategic Plan and other programs.”

“The YBA Board of Directors has voted to disseminate the balance of funds to Experience Olympia and Beyond, specifically earmarked towards promoting tourism in Yelm.” The YBA Board’s intent with their donation was to benefit Yelm the most and felt Experience Olympia & Beyond was best in attracting outsiders here, with their mission to improve the local economies and communities of Thurston County through tourism promotion.

YBA Secretary Steve Klein noted to everyone present that YBA board members knew they made the best choice, especially after later hearing about accomplishments and various awards Experience Olympia & Beyond received. Recently they contributed to Olympia being named one of the Top 29 Best Small Cities in National Geographic, designated Most Caffeinated and Greenest. They won a Silver Davey for their website, an international award recognizing small agencies for their creative and unique work.

Experience Olympia & Beyond CEO Shauna Stewart added she was thrilled when she heard the news of the $1,086 being sent from the YBA. With the funds, her team will create content to be promoted relating to Yelm, i.e. day and night trip packages to places in and around Yelm, which would include local attractions such as the Deschutes Falls Park. They will post entries on their various social media sites, including a dedicated Yelm page, about things to do and see in Yelm. Additional plans for the funds include promoting Yelm’s various summer events including UFO Fest, Jazz Fest and Prairie Days.

– This story was also featured in the Nisqually Valley News.
“Defunct Yelm Business Association Donates Funds”
“Remaining Balance of $1,086 to Go to Experience Olympia and Beyond”
Read more