Yelm Cinemas runs epoch movie on freedom of the press, “The Post”With the assault on the media, EVERY American should see this story! 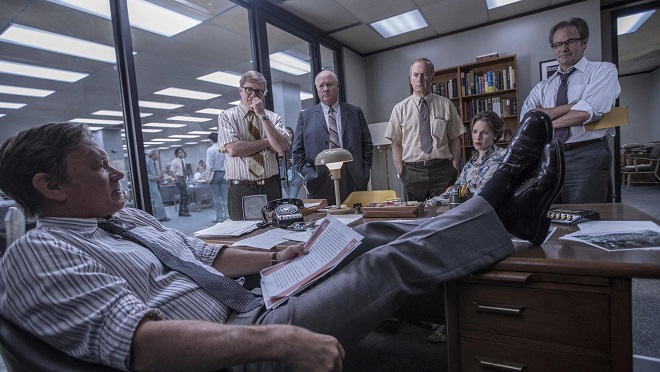 – Editor’s Note:
I was a senior in high school when the government sought to stop the publication of the Pentagon Papers in 1971. Daniel Ellsberg worked on the project and became the first modern era “whistle-blower” who gave The New York Times and Washington Post (WAPO) a collection of studies on the Vietnam War dating back to 1952 when President Truman occupied The White House. The top secret documents detailed what was hidden from the public – the Vietnam War had been determined to be unwinnable.

A year later in August 1972, I was a guest at the Republican National Convention in Miami Beach the night before beginning college at the University of Miami (FL), when President Richard Nixon was nominated for a second term to be the Republican Party candidate for President. Yes, I saw Ron Kovich and his fellow war veterans in protest outside the hall. Kovic was the author of his 1976 memoir Born on the Fourth of July, made into the Academy-Award winning 1989 film with Tom Cruise as Kovic, directed by Oliver Stone.

In the middle of my Freshman year, a third-rate burglary of the Democratic National Committee headquarters at The Watergate Hotel/Apt. complex in Washington, D. C. became more newsworthy prominent, leading to Congressional hearings, and eventually the resignation of President Richard Nixon on August 9, 1974. Those two years were the best front-row seat a late-teen could ever have witnessed about the value of the U. S. Constitution, a free press, and the right of protest, as Dr. Martin Luther King, Jr. so eloquently described in his April 12, 1963 letter written while incarcerated in the Birmingham, AL. jail.

After those formidable years of my college education and world events, I added Daniel Ellsberg to my list of heroes that lived during my lifetime, which then included Dr. King and Robert F. Kennedy. In the same spirit as Ellsberg, I added Chelsea Manning and Edward Snowden, who both took an oath to defend the Constitution and this country from all enemies, foreign AND domestic, and did what they thought was best to keep their word and their oath to our country. And WAPO Executive Editor Ben Bradlee and CBS News ’60 Minutes’ creator Don Hewitt have long been on my list of heroes.

At the end of watching The Post at Yelm Cinemas opener last weekend, I was the first one to applaud, and several in the theater added to the cacophony with their clapping. This movie should be seen by EVERY American, followed by renting at home All the President’s Men, and Mark Felt: The Man Who Brought Down The White House. And remember when you leave the theater, that Manning and Snowden both gave major acknowledgements to Ellsberg for his courage almost 50 years ago, and Ellsberg credits them today for their heroics, as well. We live in a Constitutional Republic, not a Monarchy with a King or Queen, and not a Dictatorship.

– Selle’s op-ed: “‘The Post’ reminds us of journalism’s responsibility, legacy”
By Charles Selle, former News-Sun reporter, political editor, editor in the Chicago Tribune.
“If you wonder what the lamestream media is all about, go see “The Post,” the film about the Washington Post squaring off with the Nixon administration nearly 50 years ago.

“As the media has come under increasing attacks, this movie is for budding journalists, old timers in the news biz, media darlings, journalism students and those befuddled over one president’s definition of ‘fake news.'”

“This cinematic call to arms hit a nerve with the audience at the packed screening I attended the other day. As the credits rolled, so did rounds of applause.”

“I seldom have been in a cinema showplace where the audience applauds for film. Live stage plays, yes. Film, no.”
Read more