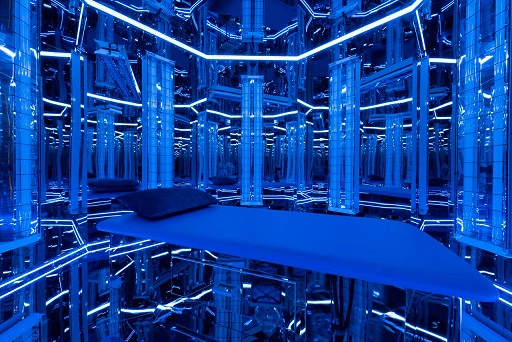 The Blu Room® at Spa Celeste, Mercer Island.
“The “Blu Room” at Spa Celeste looks like a room in a space ship, said owner Susan Janus,
but she and other users say that 20-minute sessions in the room are deeply relaxing.”
Photo courtesy: Susan Janus, Spa Celeste.

“In the midst of the gray winters in the Pacific Northwest, light can be hard to come by. Many crave a sunny weekend getaway to replenish Vitamin D, or use a light box to treat Seasonal Affective Disorder. A new business on Mercer Island is offering a different sort of mood-lifting therapy.

“Susan Janus recently opened the Seattle area’s first “Blu Room,” at Spa Celeste, 2729 78th Ave. SE. Janus, an Island resident, said that her “spa” is not traditional, but that it can help people relax and heal.

“Janus noted that it’s difficult to feel beautiful when you’re stressed out, in pain, in fear or lacking sleep, and that’s where the Blu Room comes in.”

“Janus first started using the Blu Room herself in Yelm, Washington, where the inventor (the mystic JZ Knight) resides. Janus said the sessions aided her with meditation, and believed they helped heal her knee after she tore her meniscus,” by Katie Metzger, The Mercer Island Reporter.
Read more

– From Veteran New Now:
“Blu Room: Exciting New Treatment for PTSD”
“Active duty and retired military veterans are welcome to try to the Blu Room at three locations in the Olympia, Washington area and one near St. Louis, Missouri at reduced prices.”

“The Department of Veterans Affairs estimated up to 30% of Vietnam Veterans have experienced PTSD in their lifetime. Most scientists and the public agree on the benefits of relaxation. Peer-reviewed medical studies on meditation from Johns Hopkins and UCLA confirm the healing powers such as increased attention span, improved memory, relieving anxiety and depression, pain relief, and spurring creativity.

“Locations, along with the special offers for veterans, include the following:
* Washington, Missouri

“Some journalists have reported on the benefits of the Blu Room, including The Seattle Post Intelligencer,” by Veterans News Now (VNN).
Read more

– “6 Alternative Therapies For PTSD”
“Post-traumatic stress disorder (often referred to simply as PTSD) can severely affect the lives of those who suffer from it. Sadly, this condition affects many people. According to the organization PTSD United, about 24.4 million people in the United States alone suffer from PTSD. Anyone who has experienced a traumatic event is vulnerable to developing this condition, and it is one that often affects active military service members and veterans.

The good news is, there are a number of alternative therapies that may greatly aid sufferers of PTSD. The following are just six of the many that are out there, [Number 1 listed, The Blu Room],” by Meditation Daily.
Read more

In Yelm at The U Wellness Center.
Click here for more information.

In Olympia at the Absolute Health Clinic.
Click here for more information.

* The Blu Room® recommended as an alternative therapy for PTSD
* The Blu Room® technology was founded by Yelm’s JZ Knight
* Some people with PTSD have greatly benefited from The Blu Room®
* VA Head Dr. Shulkin: the VA needs to go outside for private enterprise solutions, treatments
Click here for more information about the The Blu Room®.