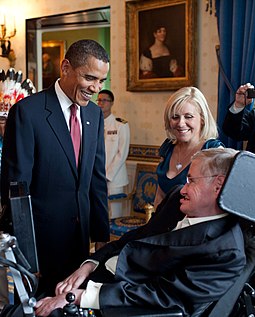 “President Barack Obama talks with Hawking in the White House before a ceremony presenting him with the Presidential Medal of Freedom on 12 August 2009. The Medal of Freedom is America’s highest civilian honor. To Stephen’s right is his daughter Lucy Hawking.”
Photo credit: Pete Souza, White House Photostream

– Editor’s Note:
In 1988 when I moved to Yelm, I became totally enthralled with the then-just-published book by British physicist Stephen Hawking, A Brief History of Time: From the Big Bang to Black Holes. This book rocketed to become one of the most popular science books of that era on cosmology (the study of the universe) written for a reader that had no prior knowledge of scientific theories. In the most simplest form, Hawking explained his concepts of theoretical physics in a manner that I, a businessman, could easily understand and get excited about embracing.

When I became aware that Hawking would be making a visit to Seattle in 1993 to give a single presentation of his work in the Seattle Center, I immediately called to get a seat (no online ability then existed to buy a ticket), which I was fortunate enough to obtain. Additionally, I bought a pass to a small post-talk gathering to meet the eminent physicist, which I was fortunate to be able to attend, one of the thrills of my lifetime. TIME Magazine highlighted Hawking’s visit to the Pacific Northwest 25 years ago in a story published February 3, 2014 (see first story below).

Hawking returned to Seattle again in 2012, his visit highlighted in this GeekWire story. Hawking’s early life was wonderfully presented in the 2014 award-winning movie, The Theory of Everything, worth a revisit now.

I salute Hawking’s single-minded focus above his human condition in expanding humanity’s understanding of reality!

– “Hawking: Is He All He’s Cracked Up To Be?”
[Highlights Hawking’s 1993 visit to Seattle]
“And then there’s something that doesn’t make it into the film [Hawking, a moving new PBS documentary on the life and work of British physicist Stephen Hawking], but which I saw myself when I interviewed him in 1993. It was in Seattle, where he’d gone to give some talks, and his aide let it slip that whenever he traveled, he would ask his hosts to set up a meeting with local children with disabilities.

These visits were totally unpublicized, but I was lucky enough to go along and watch the pretty-great physicist answered questions from a half-dozen or so kids for an hour, their wheelchairs arrayed around his in a semicircle. That’s when I became convinced that even when you strip away the hype, Stephen Hawing may not be the world’s greatest living physicist—but he’s a pretty extraordinary human being,” by Michael D. Lemonick, TIME Magazine, February 3, 2014.
Read more

– “Stephen Hawking: The 60 Minutes interview”
“In 2003 the renowned physicist appeared on 60 Minutes in celebration of his 60th birthday—a milestone he never thought he’d reach”

“Stephen Hawking, a brilliant theoretical physicist whose ability to overcome a debilitating disease was as big a mystery as some of the enigmas of the cosmos, died Wednesday at age 76. In January 2003, Ed Bradley interviewed him for 60 Minutes on the occasion of Hawking’s 60th birthday—a true milestone for a man who had, to that point, cheated death for nearly four decades.

In the interview, Bradley asked Hawking about love, comparing him to Einstein (on whose birthday he died), and whether there was room for a God in his universe,” by CBS News.
Click here for the video.

– “How Stephen Hawking transformed the world of science”
“British physicist Stephen Hawking died at the age of 76. He was known as one of the world’s greatest minds. Here are just some of his biggest contributions to the science community.”
From NBC News, Mach.
Click here for the video and see Hawking float in zero-gravity flight in a NASA tribute.

– “What Stephen Hawking taught us about black holes”
“Turns out, black holes aren’t so black.”

“Hawking showed that black holes can actually shrink. The reason, he said, was that black holes shed particles and radiate energy — a phenomenon that came to be known as “Hawking radiation.” And this conclusion meant that rather than being voids producing nothing at all — as physicists had long thought — black holes actually glow.

”As Hawking himself put it, ‘black holes ain’t so black,’” Carroll says. “This was a stunning finding that surprised everybody, and we’re still trying to understand its implications.”
By David Cox, NBC News, Mach – Space.
Read more