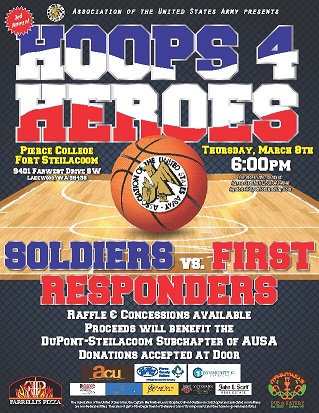 “The local First Responders play against JBLM soldiers to benefit soldiers.”
“Put on by the DuPont/Steilacoom Subchapter of the Captain Meriwether Lewis Chapter of the Association of the United States Army (AUSA); the 6th Criminal Investigation Command; the 160th Special Operations Aviation Regiment (Airborne), known as the Night Stalkers; and the Army National Guard, the third annual Hoops 4 Heroes competition will pit Joint Base Lewis-McChord soldiers against local first responders to raise funds for the DuPont/Steilacoom Subchapter.

“The competition takes place March 8 at 6 p.m. in the gymnasium of the Pierce College Health Education Building, which will be filled with the sounds of cheering fans as police, firefighters and EMTs fight to hang on to the Hoops 4 Heroes trophy — and the soldiers of JBLM fight to get it back.”

“Hoops 4 Heroes was started in 2016 by Baron Coleman, who modeled it after his very successful Teachers vs. Cops fundraisers. Admission is by donation, and all proceeds will go to benefit programs sponsored by the local chapter of the AUSA that support active-duty soldiers, retirees and their families [admission by donation]” by Margaret Bicker, Northwest Military.
Read more