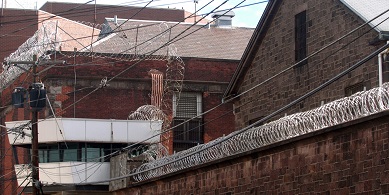 – Editor’s Note:
America’s “Mass Incarceration” epidemic has given this country the distinction of having the largest prison population in the world, which is having a disastrous affect on our nation’s, our state’s and this county’s budgets. Further, how our prison industry treats inmates is a disgrace to our nation that we consider a world leader. Michael Moore’s movie, “Where To Invade Next” clearly demonstrated how many other countries have reduced prison costs and recidivism through a method of more human treatment of those incarcerated.

Thurston County’s Law & Justice Dept., which includes the county detention facility, makes up the largest percentage of expenses in the county budget, at 75 percent of the general fund. Why not turn to those that have been incarcerated for ideas to reduce the burgeoning inmate population? Or try some things that worked in other countries from Michael Moore’s aforementioned film. Scroll down to see how Germany rehabilitates their prisoners for far less expense and impacts to society.

– CBS News 60 Minutes Presents program re-broadcast this story on March 4, 2018:
“60 Minutes Presents: Behind Bars” [How Germany successfully rehabilitates their prisoners.]
“The prison system that emphasizes rehabilitation over punishment; a bank robber who became a law professor; and beautiful music inside the ‘waiting room of hell.'”

“As we first reported in 2016, American politicians and prison supervisors are looking for new ideas – in Germany. The main objective of German prisons is rehabilitation, not retribution. Germany spends less money on prisons, but gets better results. Their recidivism rate is about half the U.S. rate. We wondered if Germany had found a key to prison reform. So we visited three German prisons, but our trip started in a small resort town about 100 miles north of Berlin.”
Click here for the video.

– Editor’s Note:
The ultimate irony is occurring in New Jersey state prisons by the banning of a book and may spread to other state prisons – Michelle Alexander’s groundbreaking book about the rise of mass incarceration in America, “The New Jim Crow: Mass Incarceration in the Age of Colorblindness.”

Shaun King wrote a provocative story in The Intercept and said this:
“Keeping a book that examines a national tragedy out of the hands of the people mired within it adds insult to injury.”

– “ACLU Says New Jersey Prisons’ Banning of ‘The New Jim Crow’ Is Unconstitutional”
“America’s jails and prisons have long since banned and censored books that the institutions determined posed a material danger to the safety of inmates and employees. There is a logic, at least, to prohibiting how-to manuals on crafting homemade weapons or escaping confined spaces. But at least two prisons in New Jersey have gone a step further, deciding to ban Michelle Alexander’s groundbreaking work on the rise of mass incarceration in America, “The New Jim Crow: Mass Incarceration in the Age of Colorblindness,” according to a letter from the American Civil Liberties Union of New Jersey to the state’s Department of Corrections.

“The ACLU of New Jersey said the ban violated the Constitution.”

“‘Michelle Alexander’s book chronicles how people of color are not just locked in, but locked out of civic life, and New Jersey has exiled them even further by banning this text specifically for them,’ said ACLU-NJ Executive Director Amol Sinha in a statement. ‘The ratios and percentages of mass incarceration play out in terms of human lives. Keeping a book that examines a national tragedy out of the hands of the people mired within it adds insult to injury.'” by Shaun King, The Intercept.
Read more

– “Debtors’ prison: ACLU report details ‘criminalization of private debt’”
“Americans’ reliance on household debt ─ and poor people’s struggles to pay it off ─ has fueled a collection industry that forces many of them into jail, a practice that critics call a misuse of the criminal justice system.

“The accusation is documented in a report by The American Civil Liberties Union, which spent more than a year investigating collection methods across the country, saying it found more than 1,000 cases in 26 states in which judges, acting on the request of a collection company, issued arrest warrants for people they claimed owed money for ordinary debts, such as student loans, medical expenses, unpaid rent and utility bills,” by Jon Schuppe, NBC News.
Read more