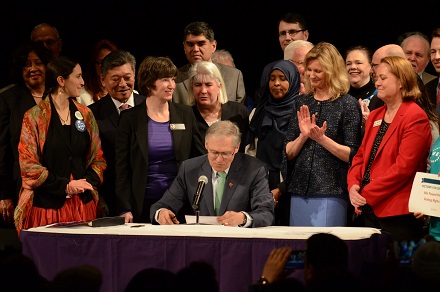 – Editor’s note:
I am so proud of Thurston County Auditor Mary Hall for her efforts in getting these voter access bills signed into law by Gov. Jay Inslee, March 19, 2018. The public is invited to Auditor Hall’s forum this evening at the Yelm Community Center, 6-7:30pm. Click here for more info.

Quoting Hall’s comments:
“It was an honor to be asked to speak at the governors bill signing today [March 19, 2018]. Same day registration, pre-registration for 16 and 17 year-olds, and automatic voter registration were all signed into law today. I worked very hard to get fellow auditor support and get these bills passed. I’m proud to have been one of the driving forces. It was a great day!”
Click here for the signing video, where Auditor Hall begins speaking at 6:30.

“Three of the bills make it easier to register to vote, allowing people to register up to and on Election Day, letting 16- and 17-year-olds pre-register to vote, and creating automatic voter registration for citizens obtaining enhanced driver’s licenses or identification cards through the Department of Licensing.

“These measures aim to address the low participation rate in elections. More than 1 million Washingtonians were eligible to register to vote in 2016 but didn’t, and of those registered, nearly 1 in 5 didn’t vote. The November 2017 General Election set a record low for voter turnout — only 37 percent of voters returned their ballots,” quoting the Office of Gov. Jay Inslee.