When the nation’s economy sneezes, Yelm catches a cold, Why our nation’s economic situation is in serious trouble, National debt doubles under Trump, ominous clouds lie ahead 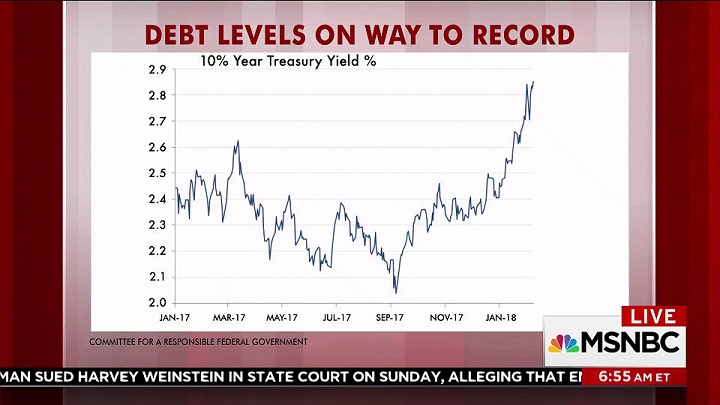 – Editor’s Note:
While many indicators of the economy are doing well, the massive explosion in debt and the country’s deficits will have to come home to roost in higher interest rates. Enjoy your tax refund while you can, for economic storm clouds lurk on the horizon, unless President Trump does away with the Federal Reserve and declares the U. S. to have no debt owed to itself. That would be exceptionally challenging for the public as well, yet will finally place this country on the road to economic freedom.

– “Rattner: Deficits headed for $2 trillion”
“President Trump is releasing his fiscal 2019 budget on Monday [Feb. 12], yet Steve Rattner says the country’s budgetary outlook is ‘potentially apocalyptic.’ Rattner returns to the show with charts to discuss.”
Click here for the video on MSNBC’s Morning Joe.

The country is facing a massive fiscal challenge, and the President’s budget doesn’t own up to these realities and fails to call for a suite of credible policies that would help change course. The budget has too many gimmicks, exaggerated savings, and rosy assumptions. Most troubling, it doesn’t make the credible hard choices necessary to help bring the debt back to more manageable levels. Fiscal leadership is needed to confront the reality that the debt is on an unsustainable path, which has been made much worse through the tax and spending policies of the past year, and this budget does not offer that leadership.
Read more

Just one day after President Donald Trump submitted a budget that fails to balance spending and revenue in the next decade — and less than a week after Congress struck a spending deal that would drive up the national debt by more than $500 billion [double the 2017 debt] — the former Republican senator from Indiana said Washington’s lack of fiscal discipline undermines national security.
By Josh Gerstein, The New York Times.
Read more

– UPDATE: March 9, 2018
“Wall Street should be afraid of what Trump does next after Cohn’s departure”

“There is a very real fear spreading through Wall Street following Gary Cohn departure from the White House that Donald Trump inner-nationalist will be fully unleashed. People are right to be afraid,” by Ben White, CNBC.
Read more