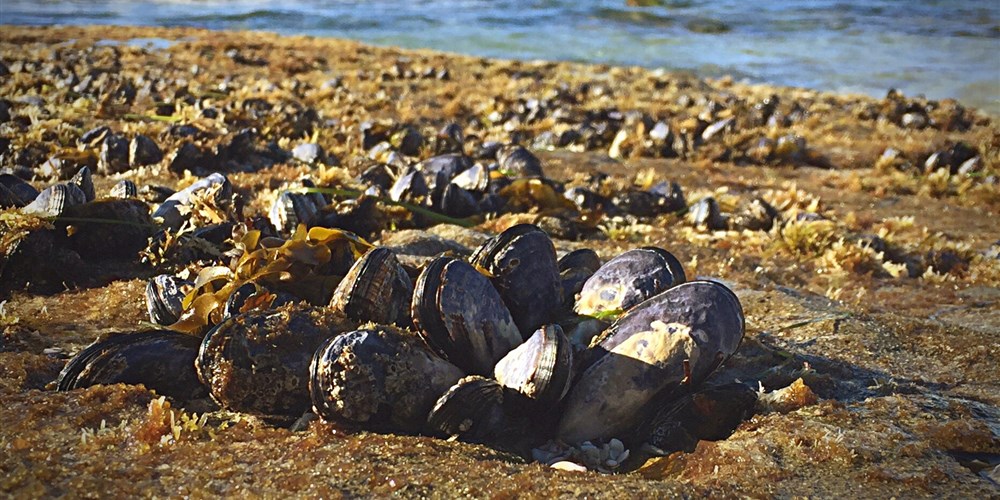 “For the first time, opioids have been found in mussels in Puget Sound”
Photo credit: Copyright: Ziad Georges / Getty Images/EyeEm

– Editor’s note:
“This demonstrates how severe the opiod problem is in the United States.

“For the first time, researchers in Washington state have found traces of an opioid painkiller in mussels in Puget Sound, which could affect fish in the area.

Scientists from the Washington Department of Fish and Wildlife found traces of the painkiller oxycodone and other pharmaceuticals in the tissues of native bay mussels in Puget Sound near Seattle, according to a report released this month. Traces of the drug were in amounts far lower than a normal therapeutic dose for humans. 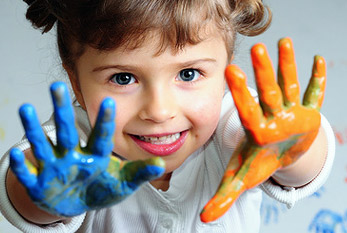 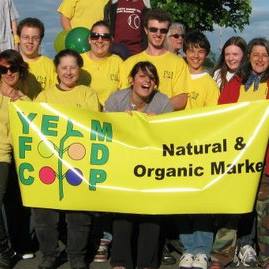 – “The Buyer’s Corner”
by Debbie Burgan
Here are some changes/new products coming in:
In the Grab n Go corner, we have some new items coming in.
* Lily’s (sic) hummus is coming out with some little 2oz containers in different flavors. They are shelf stable and come in 3 flavors: Plain, Roasted Garlic, Roasted Red Pepper.
* Lillly’s (sic) also has a 4oz cup of Roasted Red Pepper hummus with Rice crackers as well.
* For all you biscotti lovers, Marlos will be packaging their biscotti in individual pieces.
* Luke’s, the company which brings us rice chips has…a new line of Organic potato chips in multiple flavors.”
Read more from the full Yelm Co-op Newsletter.

– “FBI’s urgent request: Reboot your router to stop Russia-linked malware”
“Hoping to thwart a sophisticated malware system linked to Russia that has infected hundreds of thousands of internet routers, the FBI has made an urgent request to anybody with one of the devices: Turn it off, and then turn it back on.

“The malware is capable of blocking web traffic, collecting information that passes through home and office routers, and disabling the devices entirely, the bureau announced Friday [May 25].

“The FBI has several recommendations for any owner of a small office or home office router. The simplest thing to do is reboot the device, which will temporarily disrupt the malware if it is present. Users are also advised to upgrade the device’s firmware and to select a new secure password. If any remote-management settings are in place, the FBI suggests disabling the,” by Louis Lucero II, The New York Times.
Read more

While a fantastic conversation was engaged at the council’s special session tonight, no action was taken and the Fairpoint Bldg. sale remains intact.

There were some clear issues that were my observations borne on-the-record tonight:
1. The purpose of this evening’s Special Meeting was to request council’s approval of an extension on the Fairpoint properties purchase so the council and public could get educated on information that was not previously highlighted/known to either, and allowing public discourse to be scheduled before a final approval would be granted. Adhering to the council’s proclamations of open government, transparency, and public process were the primary subjects of this evening’s session, because May 2nd’s first public announcement to May 22nd’s approval vote, 20 days, was not enough time for public education and properly scheduled discourse on this purchase.

Further, the council and their constituents were not provided the guidance of a licensed, professional advisor. This contributed to a lack of understanding, both from council and the public, especially on important details in a technical 112 page appraisal and in the local commercial real estate market, issues that were only raised publicly this evening. Public comments to council and on social media voiced concerns that their opinion does not matter yet again, only echoed tonight with no will by the council’s majority to further investigate.

2. Very few if any of the councilors were aware of specific aspects of the appraisal that would have been best if clearly enunciated to them and the public by a licensed, professional advisor. Two councilors expressed a desire to extend the PSA to include public feedback on new information presented tonight, however eventually capitulated knowing they were not the majority, both deciding not to make a motion of such.
Bottom line, the council learned tonight they have be more involved in reading/learning/understanding nuances of Action items.

3. One councilor reported Executive Sessions have no Minutes and that the city attorney should be consulted on what can be openly discussed in public from those sessions, as the mayor was not able to quote the regulations. More education on Executive Sessions protocols will surely ensue.

4. The timing and methods of how the public documents for this sale were made available and difficulty of public access to locate via the council Agendas, on the city website, in the media, and social media were raised by some councilors, by a public commenter, and on the city’s social media platform. Better public communication is in the offing. For the future, whenever council approves a real estate Purchase-Sale Agreement (PSA), the dissemination of established information protocols via an open house, public hearing, and plenty of opportunity for public access to the related documents in social media should be entertained.

5. One councilor thanked the public for attending, noting the room was filled and had more visitors than either of the last 2 meetings that had this sale on the council agendas. However, most were city staff and rightly so as they have a vested interest, plus a former councilor and another a planning commission member.

Another asked former Councilor Bob Isom, who commented supporting the purchase, why he did not buy the property when presented to him (and council in 2012). He replied, “Because the time wasn’t right and quite frankly, it was over-valued.” However, Isom’s council did not negotiate to lower the Ycom Networks, Inc. list price and also omitted public process (no open house to educate the public, no solicitation of public inclusion, and no public hearing). Instead, they bought the 2nd floor Fay Fuller Building condo for the library in a transaction way more expensive than the Ycom Networks properties.

It’s about the future! Changes will follow from tonight’s session and that is good.

Council Members Colt, DePinto, and Carmody called a special meeting about the purchase intent of the Fairpoint building to discuss information that was not disseminated to Council prior to their May 22, 2018, 4-3 vote of approval. This meeting will occur on Tuesday, May 29, 2018 at 6:00 p.m. in the Yelm Public Safety Building. Public comment is encouraged.
Click here to read the councilors’ letter.

Click here for the Special Meeting Agenda for May 29, 6pm.

– Bottom line:
The blame game is not relevant here, what IS important is council meeting tonight to rectifying this!
This blogger suggests the public deserves to be publicly addressed on these points:
1. The council made a decision on May 22nd to purchase property without knowing the previous sales price,
2. Therefore, council was unable to compare in making a responsible offer and had not inquired further,
3. The council may wish to consider hiring a licensed, professional advisor to act in the public’s interests by properly representing the elected officials reconsidering approval of these taxpayer dollar expenditures, and in the future for any real estate.

– “An open letter to Starbucks customers from Executive Charmian Howard Schultz”
“This afternoon Starbucks will close more than 8,000 stores and begin a new chapter in our history.”

“Today 100 million customers enter Starbucks® stores each week. In an ever–changing society, we still aspire to be a place where everyone feels welcome.”

“Today we take another step to ensure we live up to our mission:

“FOR SEVERAL HOURS THIS AFTERNOON, STARBUCKS WILL CLOSE STORES AND OFFICES TO DISCUSS HOW TO MAKE STARBUCKS A PLACE WHERE ALL PEOPLE FEEL WELCOME.

“What will we be doing? More than 175,000 Starbucks partners (that’s what we call our employees) will be sharing life experiences, hearing from others, listening to experts, reflecting on the realities of bias in our society and talking about how all of us create public spaces where everyone feels like they belong—because they do. This conversation will continue at our company and become part of how we train all of our partners.”
Read more here from Schultz’s letter.

You may have noticed that when I-5 traffic is by-passing the freeway blockages via Yelm, side streets have also recently become filled, including additional traffic bypassing Yelm via 148th and Vail Road between Rainier and McKenna.

That has caused massive back-ups at the intersection of northbound Vail Rd. to northbound WA Hwy.507 near Stewart’s Meat Market.

Bald Hills and Lake Lawrence drivers be aware that GPS screens on cell phones are now directing traffic via our side streets, since traffic monitoring sensors have been mounted atop traffic lights at key intersections in Yelm and the McKenna Y.

Memorial Day 2017 – Honoring those who gave for their country 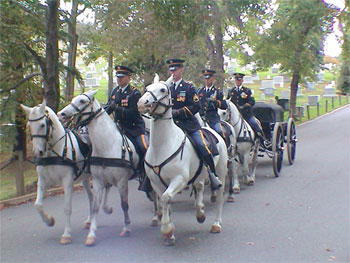 – This story is reprinted here annually since May 28, 2007:
“This weekend is our Memorial Day holiday when America pauses to honor those that have given their lives in service to their country. The Yelm Community Blog host appreciates and honors all of those who have served to defend, protect, and preserve our country from outside invaders. Memorial Day was first called Decoration Day to honor Union soldiers who died during the American Civil War. After World War I, it expanded to include those who died in any war or military action,” quoting Wikipedia.

The wars have left their mark on this area, as we are reminded of one of the first from this area to give the ultimate sacrifice in the Iraq War, Rainier’s Justin Norton, who was killed in June 2006: 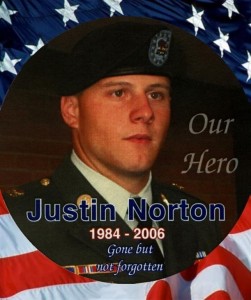 – Delta Airlines honors our military on their last flights home (February 13, 2013).
A group of Delta Air Lines employees has made a commitment to honor and recognize members of the military who have made the ultimate sacrifice. A solider and his military canine who both died in action return home, their remains arriving on U. S. soil in Atlanta in this video.
The Delta Honor Guard, which has been operating since 2005, is composed of approximately 30 men and women who volunteer their time to honor fallen troops whose remains come through Hartsfield-Jackson Atlanta International Airport aboard Delta flights, according to Brian McConnell, coordinator of the Delta Honor Guard.
Click here for this moving ceremony, which occurs plane-side in the rain, and all weather conditions.

– “DOWNLOAD “THANK YOU FOR YOUR SERVICE” THIS MEMORIAL DAY”
A Broken System, A Roadmap Of Hope
Click here 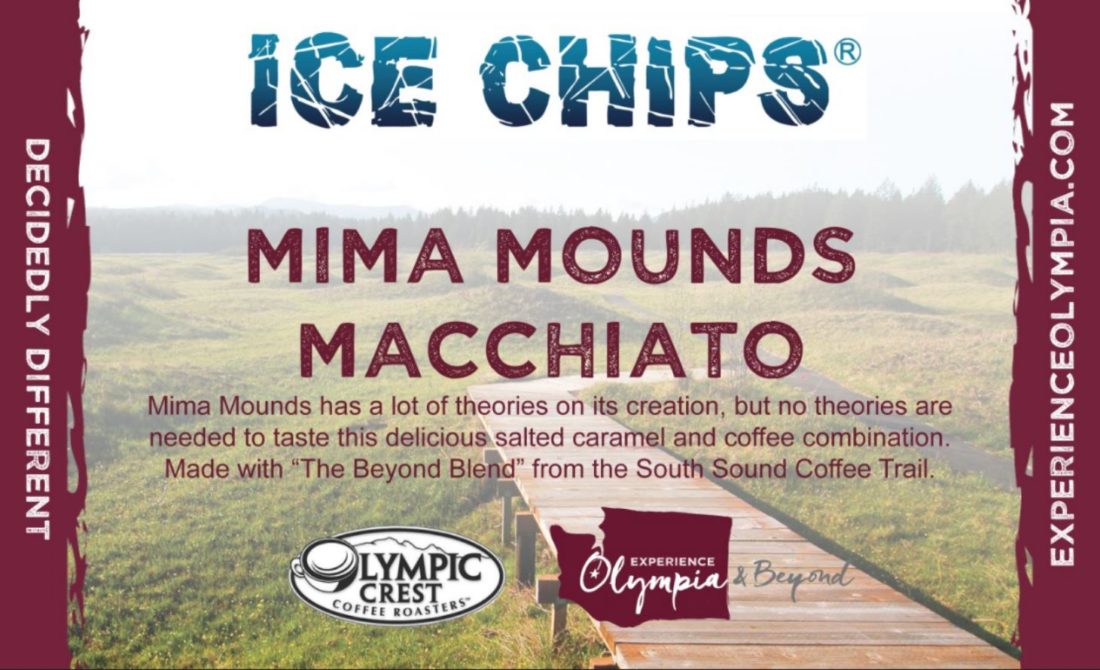 Photo credit: Experience Olympia and Beyond

– “ICE CHIPS FLAVOR REVEALED!”
“The votes are in and the winner is…Mima Mounds Macchiato! Made with “The Beyond Blend” from Olympic Crest Coffee, this winning flavor perfectly encapsulates the celebration of the newly launched South Sound Coffee Trail. Try the new flavor for yourself in the Ice Chips tasting room in Tumwater and at Sofie’s Scoops Gelato as a custom gelato flavor (limited time only so stop in ASAP!). If you’d like to purchase this flavor to sell in your business, contact Ice Chips directly for details. [sales@icechipscandy.com],” quoting Experience Olympia and Beyond.