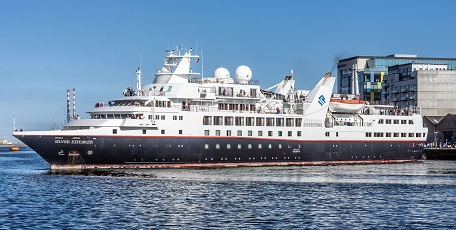 – Editor’s Note:
The former Yelm Business Assn. (YBA) recommended to city officials that the city should highlight/promote Yelm’s original role as the “Historic Gateway to Mt. Rainier.” Today, that becomes reality as tourists from an Olympia-docked cruise chip will pass through Yelm on a shore excursion to Mt. Rainier. The Fay Fuller Building (housing Yelm’s Timberland Library) was named for the first woman to summit Mt. Rainier, August 9, 1890. Fuller began her trek from Yelm and Yelm’s historical roots as Rainer’s gateway should be exploited in these modern times. What if future cruise ship passengers stopped in Yelm for lunch or a welcome talk from the mayor?

– “A cruise ship is coming to Olympia this week”
“Silver Explorer, a ship that sails for a cruise line called Silversea, is set to visit Olympia this Friday [May 11], according to the Port of Olympia.

The ship, which sails with 144 passengers and 118 crew, is expected to anchor between Boston Harbor and Olympia on May 11 and then again on May 16, the port said.

During the ship’s visits, when the ship will be anchored for 12-15 hours, passengers will be transported by small boats to the port’s Port Plaza dock. From there, they will take part in excursions to Mima Mounds and Mount Rainier,” by Rolf Boone, The Olympian.
Read more

– “American Cruise Lines’ American Constellation, a 175-passenger cruise ship, will call on Olympia as part of a Puget Sound tour in fall 2018”

“[May 24, 2017] announcement is the culmination of a three-year effort, according to the port. In addition to the port, the city of Olympia, Thurston Economic Development Council, Olympia-Lacey-Tumwater Visitor & Convention Bureau, Thurston Chamber of Commerce, and the Olympia Downtown Association also were involved in bringing the cruise line to Olympia,” by Rolf Boone, The Olympian.
Read more