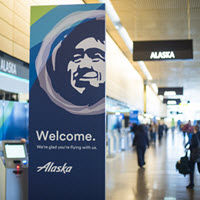 Captain Tara Wright took to the intercom to make the announcement shortly before takeoff on Sunday [May 13, 2018], telling passengers they were about to be part of ‘a pretty interesting piece of Alaska Airlines history.'”

As part of the tradition to celebrate the first catch, Alaska Airlines hosted the 9th annual Copper Chef Cook-off on Friday at Seattle-Tacoma International Airport,” by Alaska Airlines.
Read more