A Tribute: RFK 50 years after his assassination; I was then 14, I remember – A Leader who engaged, bridged the great public divide of the 60’s 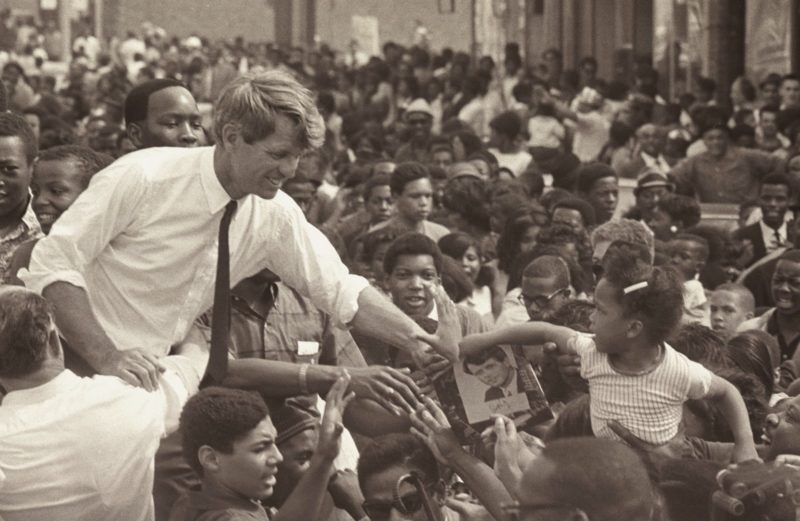 – Editor’s Note:
I had just turned 14 years old when this country lost the third leader of hope within 5 years, Robert Fitzgerald Kennedy (RFK). The nation was yet again transfixed on the coverage of television, still yet to mature, yet capturing the essence of the moment still moving to this day.

To understand what was felt, you must take 3 minutes to see this video, to listen to these words!
As MSNBC’s Chris Matthews noted, these people on the tracks were the legacy of “Bobby.”
Click here for Robert F Kennedy’s emotional final journey to Washington from New York by Train.
And: “One Thousand Pictures: R.F.K’s Last Journey (HBO)”

– Why is Robert F. Kennedy one of my heroes?
Leadership!
This country was engulfed on the precipice of a great divide on race in the early 1960’s awaiting a white leader to step forward and join Martin Luther King, Jr. in desegregating people on the basis of race. Heeding the wise advice and counsel of Harry Belafonte and others, Attorney General Robert F. Kennedy (RFK) joined with his brother, President John F. Kennedy to initiate steps moving towards a Civil Rights Act. In order to do this, RFK had a change of heart in his opinions, views, and stance on this entire issue – to end segregation in this country, which John F. Kennedy publicly proposed prior to his death Nov. 22, 2963. RFK’s grief over the death of his brother awakened him to the suffering of others from all walks of life. RFK continued to press his brother’s successor Lyndon Baines Johnson (LBJ) to see this enacted and was at LBJ’s side when the landmark Civil Rights Act was signed into law July 2, 1964. Even with the conflict between these two men, LBJ graciously turned and handed the pen to RFK used in signing this act that he and his brother originated. Fighting for the downtrodden, the unrepresented, the poor, etc., became RFK’s passion and his mantra for the next 4 years until assassinated 50 years ago today, and succumbing at 1:44am on June 6, 1968. That he changed his mind and followed his soul to meet with people from all walks of life, to listen to them, to hear them, to understand them, to embrace them, and to be interested in them, when few if any white leaders had done such in that era, is why he is on my life’s heroes list. Rare indeed!

Senator Robert Kennedy was shot in the head and neck just after winning the Democratic Primary for President of the United States in the Ambassador Hotel in Los Angeles, California, on June 5, 1968. A Palestinian immigrant named Sirhan Sirhan, angry with Kennedy over his support for Israel, shot Kennedy three times. Sirhan remains in prison to this day, last denied parole in 2016.

While the pomp and ceremony of the 1963 funeral of JFK is etched in this nation’s memory, the abject chilling sadness the country felt after the 3 assassinations of such monumental leaders of hope was imprinted in my soul just after I turned 14 that June 50 years ago. I remember so well the funeral in St. Patrick’s cathedral and especially this eulogy quote of his by brother Ted:
“Some men see things as they are and say, why; I dream things that never were and say, why not.”
Senator Edward M. Kennedy quoted these words of Robert Kennedy’s in his eulogy for his brother in 1968.
– The New York Times, June 9, 1968, p. 56.

– Chris Matthews hosted “Headliners: Robert F. Kennedy“ on MSNBC Sunday, June 3rd.
Matthews noted all of the country joined together for those hours watching the RFK Funeral Train the 226 track miles between New York to Washington to say farewell to a man and an era: black, white, Gentile, Jew, rich, poor, men, women, children. The country gasped in silence!

– “John Lewis: Bobby Kennedy inspired the best in all of us”
“Civil rights icon Rep. John Lewis joins Hardball to talk about the impact Robert F. Kennedy had on the country. Jun.04.2018” From Hardball, MSNBC.
Click here

– “‘At least we still have Bobby Kennedy.’ Then Bobby was gone.”
“In the five years between that tragedy [death of brother JFK] and his own assassination in Los Angeles while running for president, a different Robert Kennedy emerged. He’s the one my mother mourned, the one whose example haunts this fractured political moment.

“He let those kinds of things get to him, let them trouble, shatter and remake him. He reached out to people living on the margins, and they reached back with such fervor that his aides had to physically anchor him to keep him from being pulled out of the car when he campaigned in certain places.”
By Leonard Pitts, Jr., Miami Herald.
Read more