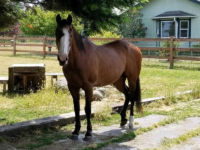 – Editor’s Note:
I continue to be shocked and dismayed at the horrific crimes that have been a plague on our area in the last decade and which make international news. This is kind of attention stains the good name of this town and the perpetrator must be found!

“Pasado’s Safe Haven and Washington’s Most Wanted Host David Rose are offering a $2,000 reward to anyone who can help Thurston County sheriff’s deputies solve what could be a horrendous case of animal abuse in Annie’s case. Additionally, Crime Stoppers of the South Sound is offering a reward of up to $1,000 for tips leading to an arrest in the case.”
Click here to contribute.

The 28-year-old horse named Annie had to be euthanized Wednesday night because she wouldn’t have been able to eat or drink without its tongue.”

“The Necropsy performed by forensic veterinarian Victoria Smith, of the Steamboat Animal Hospital, showed it was no accident.”

“Anyone with information on a possible suspect can remain anonymous. Submit a tip at nastanc@co.thurston.wa.us or by calling Thurston County Sheriff’s dispatch at 360-704-2740. You can also submit an anonymous tip to Crime Stoppers of the South Sound at 1-800-222-TIPS, via the P3 Tips App on your phone, or at www.P3Tips.com,” by David Rose and KCPQ-TV 13 (FOX) Seattle staff.
Read more