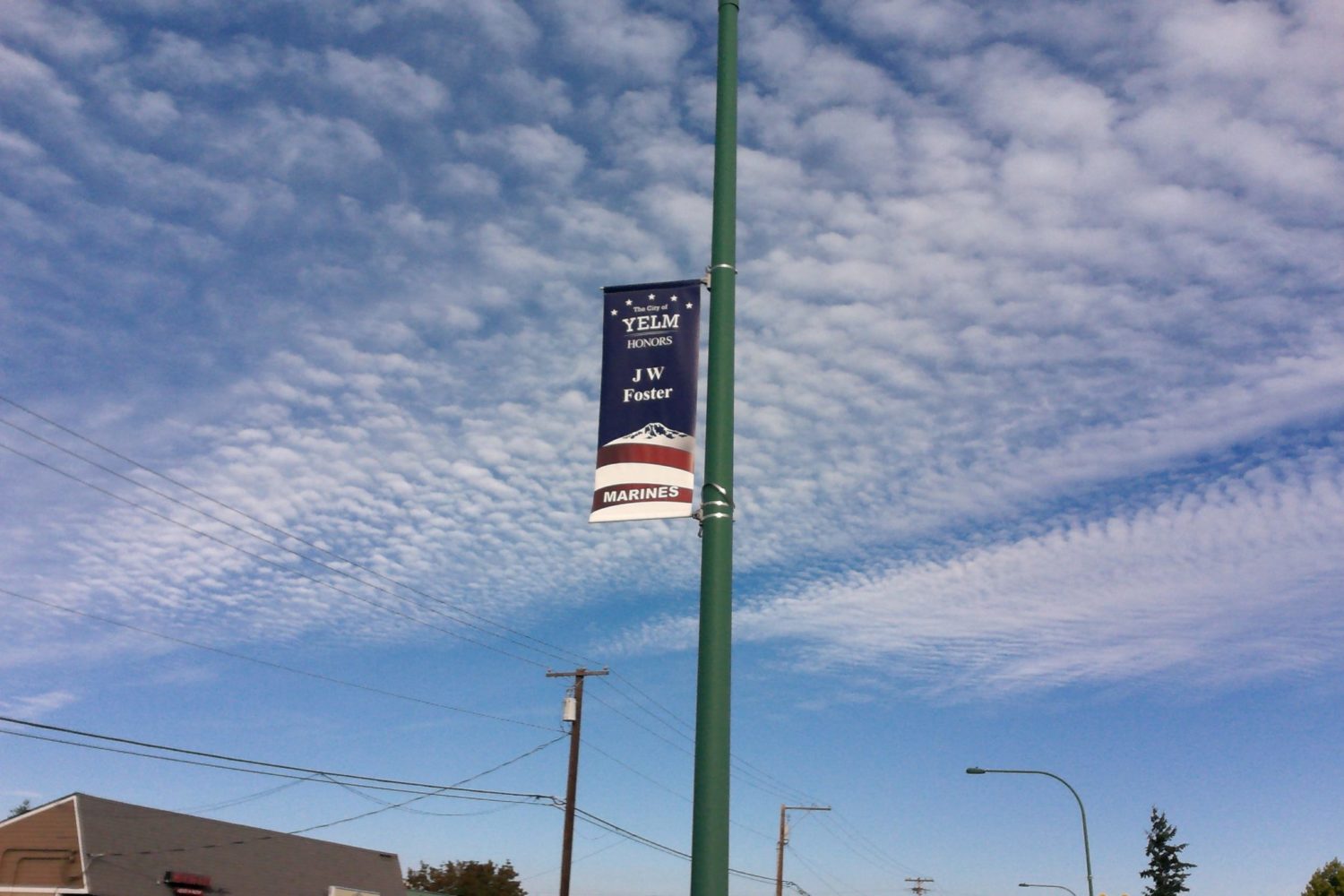 – Editor’s note:
Mayor Foster’s military banner will now remain in-place for a one year period of time and at the end of that period, the banner will be given to him, as with all of banner recipients. However, the eligibility requirements have been changed thanks to Mr. Hess’s observations and in raising this issue. Former eligibility: the individual was currently serving in the military on active duty or was retired. New eligibility: “The designated honoree may be currently serving in the United States Armed Forces (Air Force, Army, Coast Guard, Marines, Navy or National Guard), honorably discharged for any term of service, or retired military.”
Of course not categorized are our Gold Star citizens, who are lifetime members of the military.

A beautiful example of citizen participation in their local government to affect change!

In a follow-up to a Yelm citizen questioning the city’s Military Banners Program, he received this response today:
“Thank you again Mr. Hess for your inquiry about the City of Yelm’s military banner program. Although you are correct in your reading of the original wording we used to promote the program, we have not held closely to that criteria since the inception of the program. In fact, most of the banners that have been put up over the last 2 – 3 years honored greater Yelm community members who served our country over many different terms of service. We now have a more recent version of the application that demonstrates our desire to be more inclusive of residents of the ‘greater Yelm’ community and honor all those who served in the armed services.”
Click here

– City of Yelm Gov’t Facebook post evening of July 10th omitted Mr. Hess’ role in this:
“We love our military and their families, and have improved our Military Banner Program to more broadly express our gratitude for their commitment to our country and community! Banners can be purchased and hung along the main roads of the City (State Route 510 and 507) for one year and then they will be returned to the family. We’ve recently removed the oldest banners and are in the process of returning them to their owners.

If you would like to participate in the program, we’ve updated the application to demonstrate our desire to be more inclusive of residents of the ‘greater Yelm’ community and honor all those who served in the armed services. Honorees now include service members from inside and outside of Yelm city limits, and anyone retired, honorably discharged for any term of service, or actively serving in the Airforce, Army, Coast Guard, Marine Corps, Navy, Reserve, or National Guard. Thank you to all of our military service members and your families! #YelmWA #ConnectedCommunity.
Click here