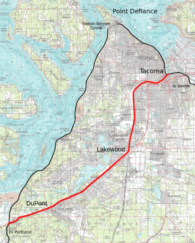 – “Positive Train Control Tests to Begin on Point Defiance Bypass”
“Testing is set to begin along Amtrak Cascades tracks where positive train control technology has been implemented, the Washington State Department of Transportation said this week.

“That includes the Point Defiance Bypass, the stretch of track that was being used for the first time when a train derailed in December, sending cars dangling over I-5 and killing three people. The train, which was going nearly 80 miles per hour when it derailed, could have avoided derailing had PTC been in operation, federal investigators said.

“The state department of transportation said then that Amtrak trains would not return to the bypass until PTC was implemented; it will be required for all tracks on which Amtrak operates by the end of the year,” by South Sound Business.
Read more