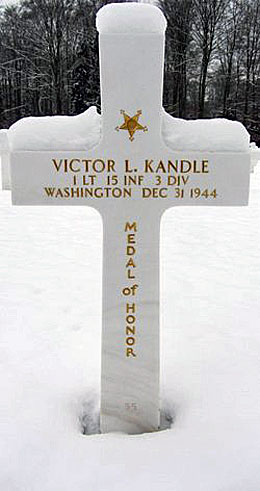 – Editor’s note:
On a recent drive to Sea-Tac Airport for a flight, I noticed a sign when passing through Roy I had not seen previously, which honors Roy native-son Victor L. Kandle. I wrote down his name and did some research before boarding the aircraft, finding the Nisqually Valley News published the HistoryLink.org story in 2016, which I missed. I found his history below fascinating, which I was inspired to learn by seeing the Hwy. 507 sign in Roy.

– “Victor L. Kandle is awarded the Medal of Honor posthumously on May 11, 1945.”
“On May 11, 1945, Victor L. Kandle (1921-1944), who was killed in action the previous New Year’s Eve, is posthumously awarded the Medal of Honor for his heroism and contribution to the American advance at La Forge, France, in October 1944. Kandle was born and grew up in Pierce County, graduating from Puyallup High School. In 1940 he enlisted in the army as a private and trained at Fort Lewis, near the family homestead where he was born. After the United States entered World War II, Kandle completed officer candidate school, was commissioned as a lieutenant, and took part in the Allied invasion of southern France.

“Late on the evening of December 31, 1944, Lieutenant Kandle was riding on the back of a tank into enemy territory. Just as the New Year arrived a German soldier threw a grenade onto the tank. The grenade hit Kandle and killed him. For his heroism and contribution to the American advance at La Forge in October 1944, Kandle was awarded the Medal of Honor posthumously on May 11, 1945. Victor L. Kandle was buried in the Epinal American Cemetery and Memorial in Epinal, France.”

Remembering Victor Leonard Kandle
“On June 4, 1945, in a ceremony at the Presidio of San Francisco, Major General Henry C. Pratt (1882-1966), commanding general of the Western Defense Command, presented the Medal of Honor that had been awarded to Victor Kandle. Marigene Kandle accepted the Medal. She brought their son Terry Kandle (b. 1943) to the ceremony. At the time Marigene was attending the University of California and Terry was living with his grandparents in Redwood City, California. Among the distinguished guests at the ceremony was California Governor Earl Warren (1891-1974).