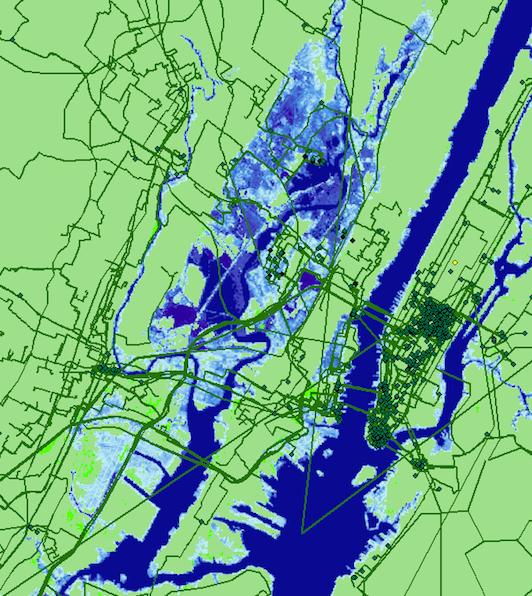 “Seawater inundation projected for New York City by 2033
and its effect on internet infrastructure. Undersea cables,
long haul fiber cables and metro fiber cables are shown
in the red/green/black lines respectively. Anything in the
blue shaded areas is estimated to be underwater in 15 years
due to climate change induced sea level rise as projected
by the National Oceanic and Atmospheric Administration.”
Photo credit: Paul Barford/Univ. of Wisconsin-Madison

– “Key U.S. Internet Infrastructure Will Likely Be Underwater in 15 Years, Scientists Say”
“Some of the key internet infrastructure in the U.S. will likely be underwater in as little as 15 years because of rising seas, scientists say.

“The situation is particularly dire for internet infrastructure in New York City, Miami and Seattle, researchers from the University of Wisconsin-Madison and the University of Oregon say. The effects would likely ripple across the internet, potentially disrupting global communications.”

“While fiber optic cables are water-resistant, they are not waterproof like marine cables. The greatest vulnerability comes where the marine cables meet fiber optics at traffic hubs, or “landing points,” along the coasts.

“The landing points are all going to be underwater in a short period of time,” Barford said, noting that an incredible amount of data that transits the internet tends to converge on a small number of landing points in big cities like New York City, Miami and Seattle,” by Pam Wright, The Weather Channel.
Read more