Most all McClatchy newspapers call on Trump to end war on our free press, Including our own daily, The Olympian – This Blogger agrees! ‘The press is not the enemy of the people,’ U. S. Senate declares in resolution. 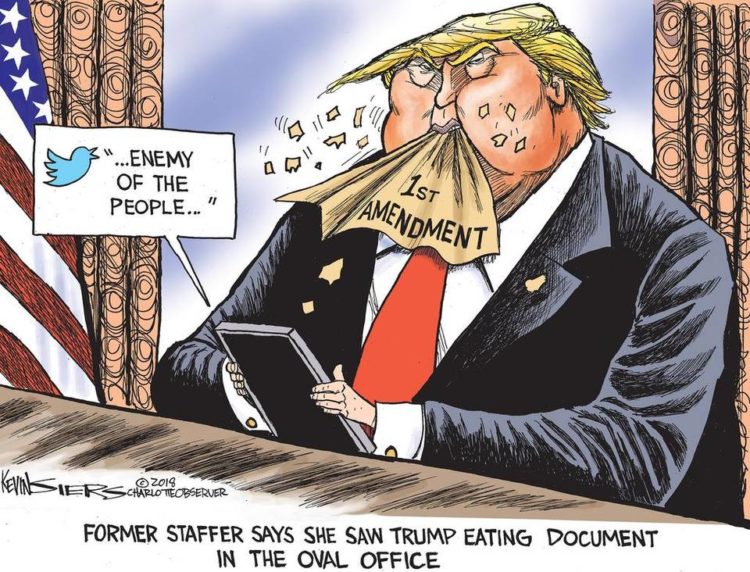 – Editor’s note:
Today, “nearly all of McClatchy’s 30 daily newspapers, “which almost never speak with one voice, are doing so now. That’s why we’re joining with fellow journalists across the country in calling for an end to the president’s war of words against our free press.” This includes our own daily newspaper, The Olympian, an op-ed that should be read by every American!

– “President Trump, we’re not ‘enemies of the people.’ End your war on our free press.”
By McClatchy Opinion Staff

“In our business, we know how much words matter. We know, too, that Trump’s references to us as the “enemy of the American People” are no less dangerous because they happen to be strategic. That is what Nazis called Jews. It’s how Joseph Stalin’s critics were marked for execution.

Every reporter who has ever covered a Trump rally knows the scratch of a threat that’s conveyed during that ritual moment when he aims the attention of the crowd to reporters. And as real as the threat of physical violence is, especially after the murder of our colleagues in Annapolis, Maryland, Trump’s aggressive posture toward the First Amendment worries us even more.”

“It’s an affront to the U.S. Constitution when President Trump threatens to eliminate the First Amendment protections the Supreme Court has built into our nation’s libel laws — or when he suggests revoking the FCC licenses of broadcast news organizations whose reporting he doesn’t like.”
Read more of the full op-ed.

“The Senate unanimously passed a resolution by Democrats on Thursday condemning attacks on the free press and affirming that “the press is not the enemy of the people,” President Trump’s label for the media.

“The move came as more than 300 newspapers and other media outlets joined The Boston Globe in publishing editorials Thursday promoting freedom of the press and refuting Trump’s denouncements,” by Nicole Gaudiano, USA TODAY.
Read more

– Fred Obee’s Editorial, Executive Director, Washington Newspaper Publishers Association
“I do not write today to choose sides on the right or left of national politics. Instead, I write today on behalf of the more than 80 newspapers of the Washington Newspaper Publishers Association as we join others across the nation in defense of our profession.”

“Our free press supports the rights of people expressing every imaginable political viewpoint. It’s not fake. It is very real and it’s time our President recognized and supported this very basic and central concept of our democracy.”
Read more