Poverty in America rears-up again from decades ago, Yelm area has felt the affects, too! 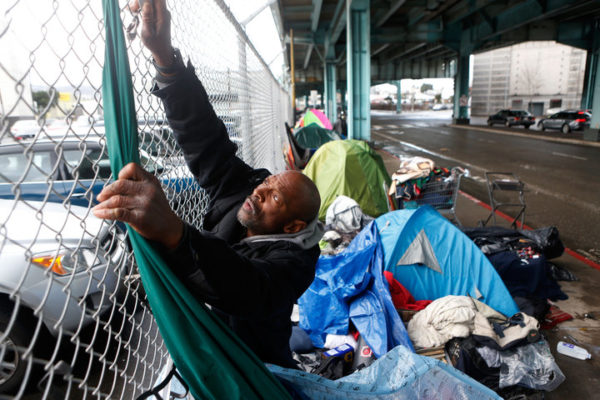 “Jonathan Payne, a homeless man, takes down tarps he had used to protect
his possessions during an El Nino-driven storm in San Francisco on Jan. 6, 2016.”
Photo credit: Beck Diefenbach, Reuters.

– Editor’s Note:
The affects of poverty have been felt in our area as well, as homelessness and other social issues are on the rise here.

– “The Trump Administration Says Poverty Is Over. They’re Lying.”
“15.6 million American families were food insecure for at least part of 2016, meaning they had limited access to food because they couldn’t afford what they needed.”
By Bryce Covert, Huffington Post guest writer, also a contributing Op-Ed writer at The New York Times and a contributing writer at The Nation.
Read more

“The policies pursued over the past year seem deliberately designed to remove basic protections from the poorest, punish those who are not in employment and make even basic health care into a privilege to be earned rather than a right of citizenship,” says the report, which will be presented to the Human Rights Council of the U.N. General Assembly,” by Jeff Stein, Washington Post.
Read more