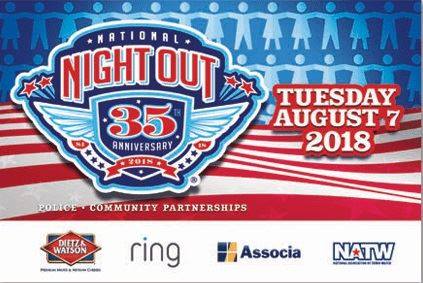 © National Association of Town Watch.
National Night Out™ is a registered trademark of NATW

National Night Out is designed to:
(1) Heighten crime and drug prevention awareness;
(2) Generate support for, and participation in, local anti-crime efforts;
(3) Strengthen neighborhood spirit and police-community partnerships; and
(4) Send a message to criminals letting them know neighborhoods are organized and fighting back.

– From the Yelm Police Dept.
National Night Out Against Crime at the Yelm Community Center August 7th!
“National Night Out is Tuesday, August 7th from 5:00 to 8:00 p.m. at the Yelm Community Center. There will be food and giveaways for the youngsters. In additional to several Yelm Police Officers present for you to talk to and visit with we will also have members from SE Thurston Fire/EMS, Thurston County Deputies and Washington State Patrol.

“We will also be filming a portion of our Yelm Police Department lip sync video which will include everyone at the event. Bring your friends and neighbors and be a part of a very special event.”
Read more