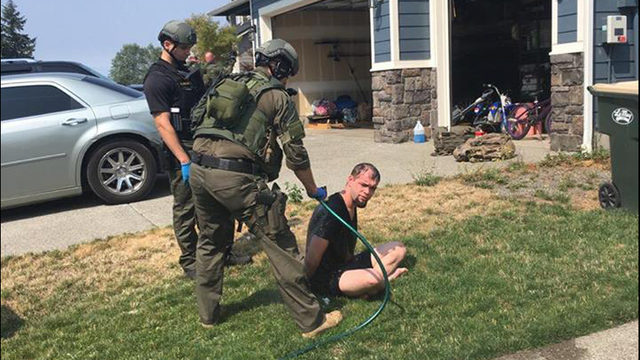 – “Police seize meth, arrest fugitive after Yelm standoff”
“Authorities from Yelm, Thurston County, State Patrol and other agencies were serving search and arrest warrants at a home in the 9300 block of Prairie Wind Street Southeast in Yelm Thursday when the wanted man refused to come out.

“After the Thurston County SWAT team was called in and tear gas was pumped into the attic, [Zachary A.] Altona came out, and after a brief struggle, was taken into custody.

“Detectives from the Thurston County Narcotics Task Force searched the home and seized about 3 ½ pounds of methamphetamine, packaging material and scales. Also found near the attic entrance was a loaded Colt .45 pistol and about $2,000 cash,” by KIRO TV 7 News, Seattle.
Read more

– “SWAT team ends Yelm standoff by deploying chemical agents, arresting man in attic”
“A 24-year-old man was arrested after authorities say he barricaded himself inside the home. After multiple attempts to contact him, authorities released ‘chemical agents’ into the home and the SWAT team was able to locate the man in the attic, according to a Thurston County Narcotics Task Force news release,” by Danielle Derrickson, The Olympian.
Read more