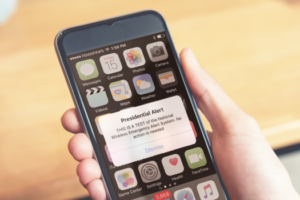 – Editor’s note:
Let’s hope that President Trump does not use this emergency system for Twitter-type political purposes.

– “FEMA’s ‘Presidential Alert’ test postponed as some Americans want to disconnect”
“The wireless emergency alert test was set to go out Thursday [Sept. 20] before FEMA announced it will be pushed back to Oct. 3.”

“The initial announcement was met with concerns from social media users who stated that a direct message from President Donald Trump to the nation could be used for political purposes, similar to how he uses his official Twitter page.

“One online user responded to FEMA’s announcement via Twitter, saying, ‘We don’t need presidential alerts! We already have public emergency alert messaging. This is not necessary!’

“Many also went on to raise the issue of the alert being mandatory, with no way to opt of it.”

“Some users even threatened to cancel their cellphone service, while others said they would protest the test by turning their phones off, creating the hashtag #GoDark920 in response to the original test date,” by Farnoush Amiri, NBC News.
Read more

“The messages will bear the headline “Presidential Alert”, the Federal Emergency Management Agency (FEMA) said in a statement this week. Phones will make a loud tone and have a special vibration, said FEMA, which will send the alert.

“The test message, …, will read: “THIS IS A TEST of the National Wireless Emergency Alert System. No action is needed.”

“The test has been scheduled to ensure that the alert system would work in the event of a national emergency. U.S. cellphone users will not be able to opt out,” by Reuters.
Read more