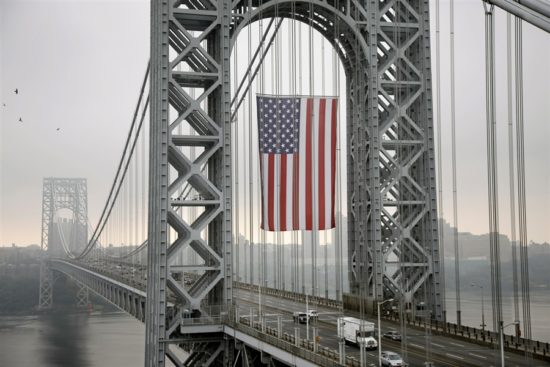 The Port Authority of New York and New Jersey unfurled the largest
free-flying American flag in the world over New York’s George Washington Bridge.
The flag was hung in the upper arch of the bridge’s New Jersey tower,
meant to honor working men and women on Labor Day [2013].
The flag was 90 feet long by 60 feet wide.
Photo credit: Mel Evans / AP

THIS ENTRY WAS FIRST PUBLISHED ON THE YELM COMMUNITY BLOG SEPTEMBER 3, 2007.

– “Labor Day is a United States federal holiday that takes place on the first Monday in September. The holiday began in 1882, originating from a desire by the Central Labor Union to create a day off for the ‘working man’. It is still celebrated mainly as a day of rest and marks the symbolic end of summer for many. Labor Day became a national holiday by Act of Congress in 1894,” quoting Wikipedia.

– “Labor Day differs in every essential way from the other holidays of the year in any country, said Samuel Gompers, founder and longtime president of the American Federation of Labor. All other holidays are in a more or less degree connected with conflicts and battles of man’s prowess over man, of strife and discord for greed and power, of glories achieved by one nation over another. Labor Day…is devoted to no man, living or dead, to no sect, race, or nation,” quoting the U. S. Dept. of Labor website.

– The History of Labor Day
From the U. S. Dept. of Labor website.
Read more

– “Lesson of Labor Day” written in 2010 by Robert Reich.
Robert Reich has been Chancellor’s Professor of Public Policy at the University of California at Berkeley since January 2006. He has served in three national administrations, most recently as secretary of labor under President Bill Clinton.
Read more of Reich’s astute view “The Real Lesson of Labor Day,” September 3, 2010.

The Yelm Community Blog pauses to acknowledge all laborers worldwide this day, for through all of our toils is the world a better place!