With the President’s threatened government shutdown Sept. 30th, Trump’s biggest problem last week was the exploding national debt, And this Report: “Being middle-class isn’t what it used to be” 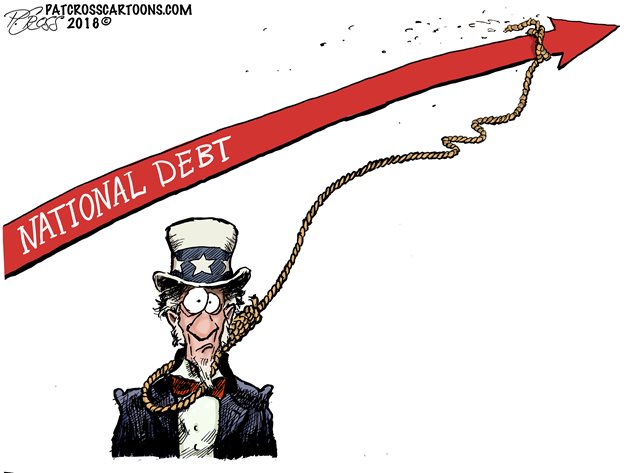 – Editor’s Note:
I post national stories here that affect residents in Puget Sound, as I have done for 12 1/2 years publishing this blog and did the same during the tenures of other Presidents, including Obama’s and George W. Bush’s.

AND you may think those are threatening enough, however the “elephant in the room” that garnered little media coverage last week was Trump’s looming threats of another government shutdown and the national debt crisis! Those two issues have the most possibility of affecting Puget Sound residents right here in the Yelm area in the coming months.

While President Trump can wipe out the debt by a stroke of the pen by eliminating the Federal Reserve and returning the management of the U. S. economy to Congress as directed by the Constitution, I do not see Trump doing so. Here are some key reports:

– “Further Tax Cuts [proposed Sept. 10] are the Height of Fiscal Irresponsibility”
“With trillion-dollar deficits coming as soon as next year according to the White House’s own projections, it is beyond irresponsible to put even more tax cuts on the national credit card to fuel an economic sugar high that won’t last.

“Our society is aging, and our largest trust funds and social programs are running out of money. It’s a fiscal hole in the trillions that isn’t going to be fixed with more unpaid-for tax cuts.

“The tax cut bill was a sad, missed opportunity. Congress should scrap this plan and pursue real tax reform that broadens the base to finance lower rates, closes loopholes, simplifies the code, and creates lasting economic growth while reducing or at least not worsening the national debt. And while they are at it, they should control spending rather than increase it. Instead, policymakers’ choices seem to grow more irresponsible every day,” by the Committee for a Responsible Federal Budget.
Read more

– Updated September 14, 2018
“The U.S. national debt is more than $21 trillion. It exceeded that amount on March 15, 2018. It’s greater than the economic output of the entire country,” by Kimberly Amadeo, The Balance.
Read more

– “Will Trump shut down the government this month? Honestly, who knows.”
“Few people in Washington can believe we’re asking this question right now, less than two months before an election. But largely because of President Trump, it has to be asked: Is the government going to shut down this month?”

“That has little to do with Congress itself, which is remarkably unified in wanting to fund the government by the Sept. 30 fiscal deadline. But Trump has threatened at least seven times in the past six weeks to shut down the government if Congress doesn’t give him $5 billion to start building his border wall now,” by Amber Phillips, Washington Post.
Read more

– “AP fact check: Trump’s blustery myths on hurricanes, income”
“In a stormy week, President Donald Trump blustered and distorted reality, denying massive deaths from a hurricane that scientists believe to be one of the nation’s deadliest and blowing out of proportion U.S. economic growth and his role in spurring it.”

“And as the November elections near, Trump is citing record-breaking middle-class income that isn’t so and exaggerating progress on his long-promised wall along the U.S.-Mexico border,” by the AP.
Read more

– “Being middle-class isn’t what it used to be”
“As Congress debates increasing work requirements for safety-net programs, new research from the Brookings Institution shows just how many Americans are dependent on that safety net,” by Irina Ivanova, CBS News.
Read more

– “The billionaire behind the National Debt Clock has had it with Trump”
“Republicans, including President Donald Trump, campaigned on balancing the budget, yet they have added more than $1.5 trillion to the debt in the past year.

“The result is that by the end of 2018, the nation will hit milestone: The federal government’s total debt owed to outsiders (known as “debt held by the public”) will exceed all debt that U.S. households have for mortgages, credit cards, cars, student loans and other personal loans for the first time in modern history, according to JPMorgan.