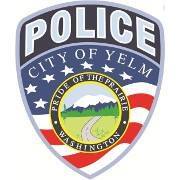 – From the City of Yelm Police Department, Wed., Sept. 12, 2018
“On September 12, 2018 the Yelm branch of Olympia Federal Savings was the victim of an attempted Bank Robbery. At 8:00 a.m., Yelm Police Department was dispatched to a man with a gun at the Olympia Federal Savings Bank at 907 Yelm Avenue West. Responding units were advised that the male that displayed the handgun had fled on foot towards the Nisqually Medical Plaza. Units arrived within minutes and began searching the area. Yelm High and Yelm Middle School were placed on lockdown immediately for precautionary reasons until the area was secured. The investigation determined that a black male in his late 30’s to early 40’s, 5’10” to 6’ in height with medium length dark hair with golden highlights wearing a black puffy winter jacket and black hat was waiting in front of the bank for an employee to arrive. When the employee arrived, the suspect male told her to open the door to the bank and displayed a black handgun. At that time the suspect decided to flee on foot towards the Yelm Medical Plaza and enter a newer style black SUV. Investigators are reviewing surveillance footage from cameras in that area. Anyone with information is encouraged to call the Yelm Police Department at #360-458-5701 or 911.”
Read more