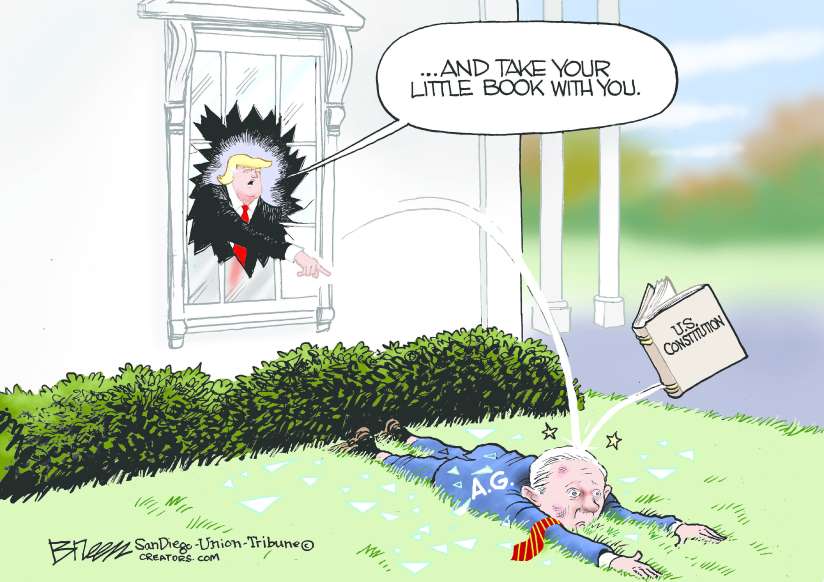 UPDATE: Nov. 8, 2018
Mere hours after my blog post of Nov. 7th, President Trump forced Attorney General Jeff Sessions to resign, attacked the media in what one report called an “off-the-rails” press conference, threatened a “warlike posture” with the Democrats, and revoked a CNN reporter’s press pass to The White House. This echoes exactly what I said would occur, that the President will now be emboldened like this country has never witnessed. Trump previously said he wanted Sessions fired because Sessions recused himself and would not reign in an ongoing investigation against Trump, and firing Sessions with that as cause is clearly Nixonian-style obstruction of justice.

This country is now at the entry gate of a Constitutional crisis that is about to get much worst. If Trump was truly innocent and had nothing to hide as he often touts, then he would let the Mueller investigation continue to conclusion unhindered by the threat of potentials from an acting Attorney General beholding to Trump’s will. Trump did not even have the leadership skills to meet with and thank Sessions personally for his service when he forced him to resign via his minions.

President Trump’s commitment to free the U. S. from the grips of what he calls the “Deep State” only to be replaced with his dictatorship, disrespect of the rule of law, and trashing adherence to the United States Constitution he gave an oath to uphold, is abhorrent.

There is a nationwide protest today at 5pm in each time zone to protect the Mueller investigation. Our area’s site is the Olympia State Capitol Legislative Steps, 5pm. Click here for more information.

————————————————————————
Now, Lindsay Graham wants a job in the Trump Administration, however remember his comments a year ago:
“Remember When Lindsey Graham Warned, ‘If Jeff Sessions Is Fired, There Will Be Holy Hell to Pay’?” quoting Peter Suderman, Reason.com.

“Graham: Trump firing Mueller would be ‘the beginning of the end of his presidency,'” CNN, March 18, 2018. Click here

– “After the midterms: Trump learns nothing, and America’s slide into pseudo-democracy continues”
“Trump and his followers are incapable of insight into their behavior — for them this mixed result is a vindication”
By Chauncey DeVega, Salon.
Read more

– “Jeff Flake: Republicans must move beyond the cult of Trump’s personality”
In the Washington Post.
Read more

– “Trump’s Appointment of the Acting Attorney General Is Unconstitutional”
“The president is evading the requirement to seek the Senate’s advice and consent for the nation’s chief law enforcement officer and the person who will oversee the Mueller investigation.”
By Neal K. Katyal and George T. Conway III. Op-Ed in The New York Times.
Read more

– “Trump Will Start the End of the World, Claim Evangelicals Who Support Him”
By Cristina Maza, Newsweek.
Read more