UN Report: “Impending Catastrophe” within 12 years as world warms, Does anyone setting government policies care? Or are the wolves leading the sheep over the edge? 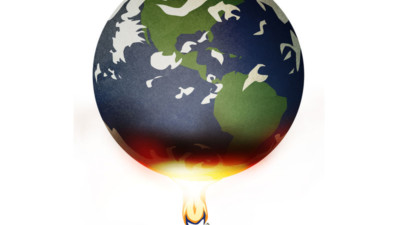 – Editor’s note:
With the Trump Administration pulling the U. S. out of the Paris Climate Accord and focusing on fossil fuels, one of the world’s largest contributors to global warming (the USA) is absent on contributing to the survival of the planet’s surface!

“The biggest news in the corporate media regarding climate change since my last dispatch has been the UN report stating that we have 12 years left to limit a full-on climate change catastrophe. To avoid this fate, we would need to spend those 12 years curbing global emissions dramatically. Essentially, there would need to be a government-mandated plan across the globe that would enable us to limit warming to 1.5 degrees centigrade (1.5°C) rather than the 2°C goal of the 2015 Paris climate talks. Eliminating that extra .5 of warming would save tens of millions of people from sea level rise inundation, and hundreds of millions from water scarcity and a myriad of other catastrophic impacts. Limiting warming to 1.5°C would, scientists have said, require a radical rethinking of virtually every facet of modern society, including an abandonment of our entire fossil-fuel based economy. However, currently, we are headed for at least a 3°C increase by 2100, with no mass government mobilization in sight,” by Dahr Jamail, Truthout.
Read more