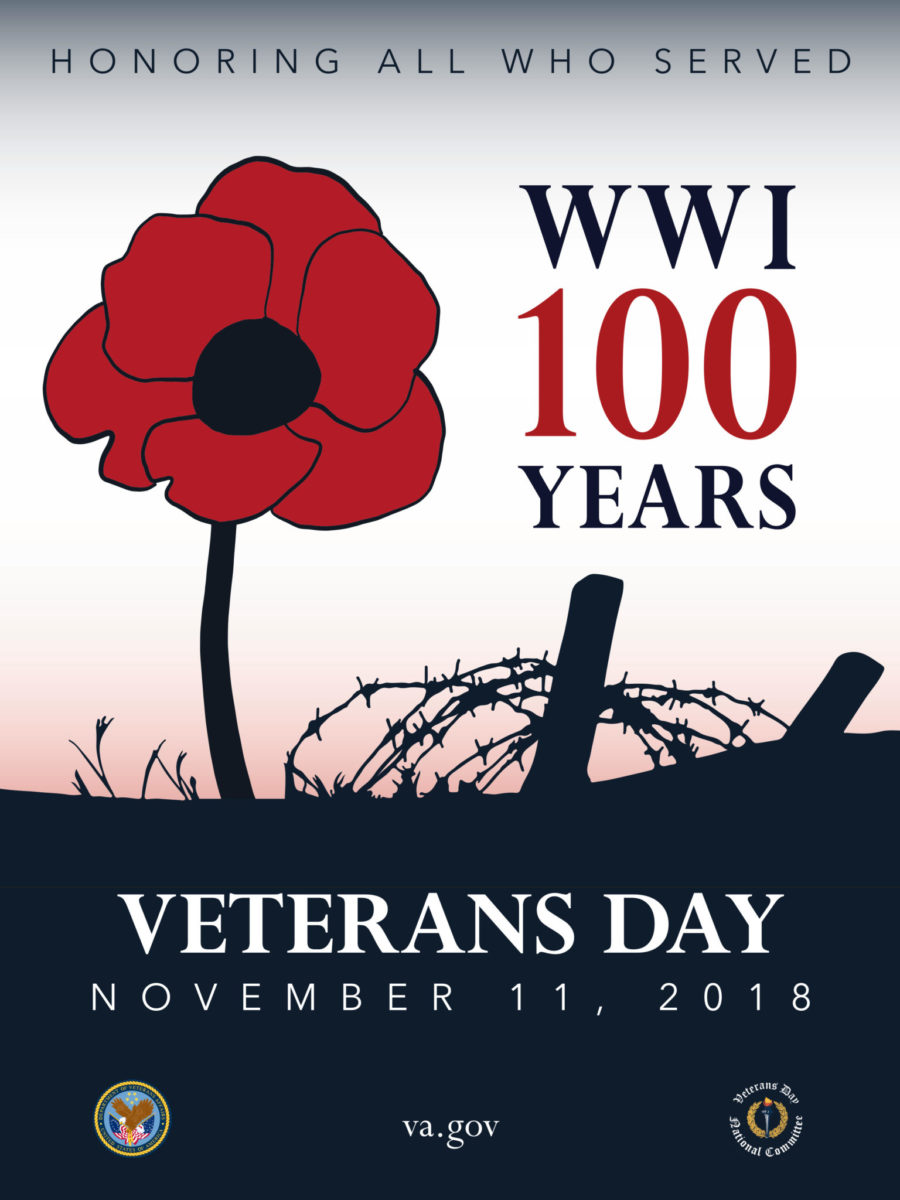 – Veterans Day Observances
* National Observance
“The Veterans Day National Ceremony is held each year on November 11th at Arlington National Cemetery. The ceremony commences precisely at 11:00 a.m. with a wreath laying at the Tomb of the Unknowns and continues inside the Memorial Amphitheater with a parade of colors by veterans’ organizations and remarks from dignitaries. The ceremony is intended to honor and thank all who served in the United States Armed Forces.” Read more

* Area Observances
Tenino: The new Veterans Memorial in Tenino City Park will be dedicated at a ceremony at 10 a.m. U.S. Rep. Denny Heck and Thurston County Commissioners will attend. Heck and U.S. Army Lt. Gen. Gary Volesky will speak. Representatives from Joint Base Lewis-McChord and an ensemble from the 56th Army Band based at JBLM also will take part. Tenino Mayor Wayne Fournier will conclude the ceremony at 11 a.m., marking the moment a century ago when the Armistice Treaty ending World War I took effect.

State Capitol: The Thurston County Veterans Council and state Department of Veterans Affairs will host a ceremony at 10:30 a.m. in the Rotunda in the Legislative Building on the Capitol Campus, featuring performances by the American Legion Band, World War I displays, speakers and a tolling of the bells.
Read more

– ABOUT VETERANS DAY
“Veterans Day is an annual United States holiday honoring military veterans. A federal holiday, it is observed on November 11. It is also celebrated as Armistice Day or Remembrance Day in other parts of the world, falling on November 11, the anniversary of the signing of the Armistice that ended World War I. (Major hostilities of World War I were formally ended at the 11th hour of the 11th day of the 11th month of 1918 with the German signing of the Armistice.)…

“The U.S. President Woodrow Wilson first proclaimed an Armistice Day for November 11, 1919. In proclaiming the holiday, he said

“To us in America, the reflections of Armistice Day will be filled with lots of pride in the heroism of those who died in the country’s service and with gratitude for the victory, both because of the thing from which it has freed us and because of the opportunity it has given America to show her sympathy with peace and justice in the councils of the nations.” quoting Wikipedia.
Read more

– HONORING ALL SOLDIERS WHO SERVED
“For most of us Veterans Day holiday just means a chance to enjoy an extra day off from work or school. However this day November 11, be sure to spend a few minutes on its true purpose, by acknowledging any person who served in any military service branch. These include the members of the US Army, Air Force, Marine Corps, Navy or the Coast Guard.

“Many people often believe that Veterans Day and Memorial Day are celebrated for the same reason. There is however a important difference between the two holidays. While both honor our military personnel, the Memorial Day is a day to remember and pay respect to all that died serving our country in a war, while Veterans Day is to celebrate all soldiers who served in the forces at anytime, during peace or war,” quoting Veterans Day 2015.
Read more

– “ARMISTICE DAY”
“On the 11th hour of the 11th day of the 11th month of 1918, fighting ceased in the ‘war to end all wars.’ People went on killing and dying right up until the pre-designated moment, impacting nothing other than our understanding of the stupidity of war.”

“World War I, then known simply as the world war or the great war, had been marketed as a war to end war. Celebrating its end was also understood as celebrating the end of all wars,” quoting David Swanson, World Beyond War.org.
Read more