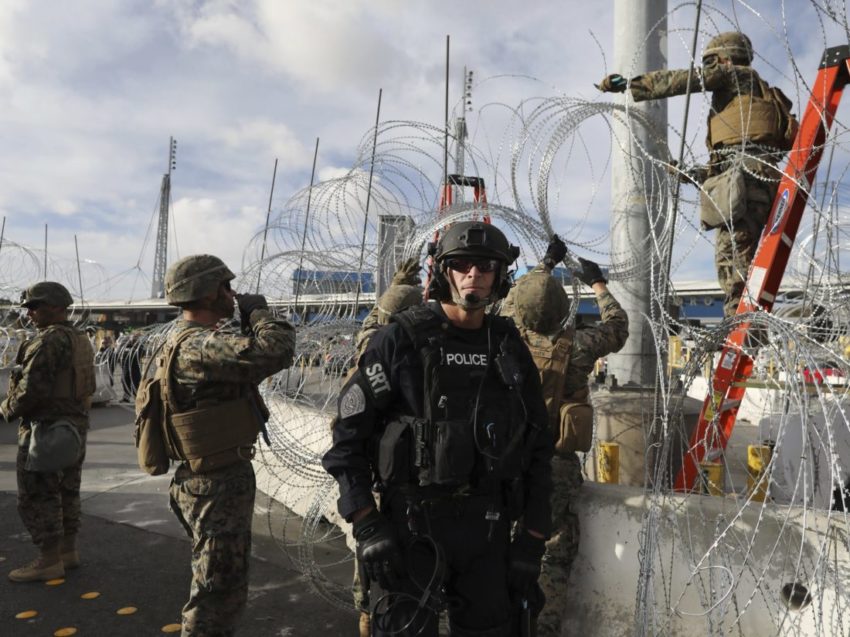 “Troops set up concertina wire as a Customs and Border Protection Protection agent stands guard on the U.S. side of the border
with Mexico, on Thanksgiving Day.” Credit: Rodrigo Abd/AP

– Editor’s note:
I am in total agreement and support The [Tacoma] News Tribune Editorial Board’s comments.

– By The News Tribune Editorial Board
“Dear Mr. President: End border mission and bring JBLM troops home for the holidays”

“Last week, while most of us sat at a Thanksgiving table surrounded by family and friends, 5,800 active-duty military and 2,100 National Guard troops were down south preparing for a caravan of immigrants making their way to the U.S.-Mexico border.

“Among them were approximately 200 JBLM soldiers, borrowed from military police, medical support and public affairs units at the base south of Tacoma.

“They didn’t make it home for Thanksgiving, despite pleas from Washington state politicians. All we can hope for now is that they return to their families for Christmas, though it looks increasingly doubtful that President Trump’s excessive buildup at the border will end by mid-December, as originally planned.”

“Heightening the border tension to make a wall more appealing is a flanking maneuver worthy of a Napoleonic general. Whether it turns into Trump’s Waterloo remains to be seen.

“In the meantime, defense officials now say this operation is expected to extend into January.”
Read more