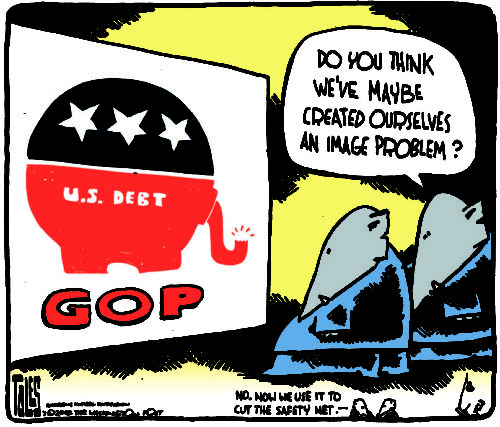 – “Trump on Coming Debt Crisis: ‘I Won’t Be Here’ When It Blows Up”
“The president thinks the balancing of the nation’s books is going to, ultimately, be a future president’s problem.”

“Sources close to the president say he has repeatedly shrugged it off, implying that he doesn’t have to worry about the money owed to America’s creditors—currently about $21 trillion—because he won’t be around to shoulder the blame when it [national debt] becomes even more untenable.

“The friction came to a head in early 2017 when senior officials offered Trump charts and graphics laying out the numbers and showing a ‘hockey stick’ spike in the national debt in the not-too-distant future. In response, Trump noted that the data suggested the debt would reach a critical mass only after his possible second term in office.

“‘Yeah, but I won’t be here,’ the president bluntly said, according to a source who was in the room when Trump made this comment during discussions on the debt,” by Asawin Suebsaeng, Lachlan Markay, The Daily Beast.
Read more