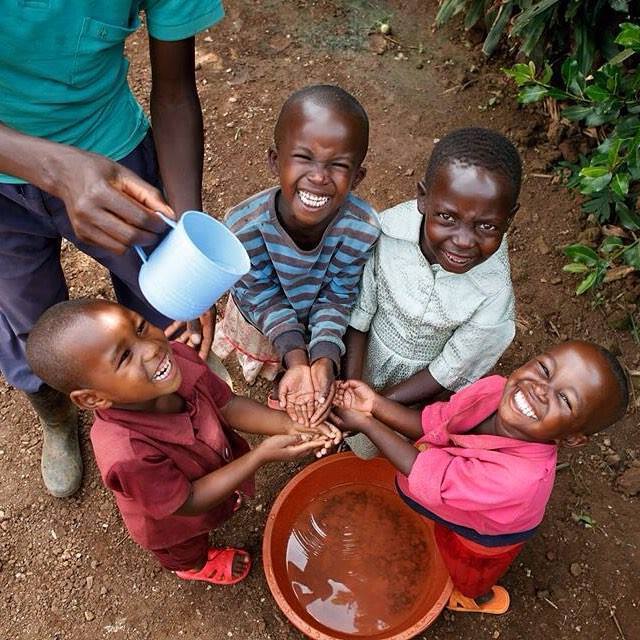 Yelm area’s Wayne Medrud, son Noah, Robin Lee, and others work passionately in support of Friendly Water for the World. Medrud told the Yelm Community Blog, “Through a presentation at the Rotary, we became aware of an orphanage that was formed 17 years ago by Seed Faith Ministries and a church here on Vail Road. Through donations from Rotarians, the Interact Club of Yelm (youth Rotary), and donations taken at Toast Masters, we have now provided them with filters for the orphanage, their clinic and the school that the kids attend. Seed Faith Min tries has now purchased filters for other surrounding schools.
We have several extremely exciting things going on and opportunities for people to get involved.”

– Here is one of their recent fliers:
“We Stopped Cholera”
Olympia, Washington-Based Clean Water Group Eliminates Cholera in 26 Orphanages in the Congo

When Michael’s brother in the Leve Moi orphanage died after writhing in pain for three days, Michael was too sick to cry. And now it was happening to his best friend. Ten others had died in the previous month. All the kids were in shock, and the orphanage staff as well. All the children had died in the orphanage itself; there was no money for a hospital, little for medication, and they couldn’t even afford coffins. Every child was traumatized. All anyone could think of was whether he or she would be next.

In Goma, a city of a million people in eastern Congo-DRC, with 600,000 refugees ringing the city, there is not a drop of clean water. Since January 2015, there have been more than 100,000 documented cases of cholera, with over 2,000 deaths. Overall, in the past three years, there have been far more cholera deaths in the Congo and surrounding countries than all ebola-related deaths worldwide combined.

It has been worse for the 3,800 children in the 26 orphanages in the city, most of which were established to take in orphans from the 17-year war which killed almost seven million people. Friendly Water for the World Medical Officer Dr. Kambale Musubao visited all 26, documenting more than 700 cholera cases between January and June, and at least 67 deaths, almost one out of every ten confirmed cases.

Friendly Water for the World (www.friendlywater.net) had trained two teams of BioSand Filter fabricators (one made up entirely of women rape survivors from the war.) Over the past two months, Dr. Kambale and his colleagues have installed BioSand Water Filters in all 26 orphanages, and taught basic hygiene and community sanitation. As of September 2nd, there is not a single case of cholera in any orphanage in Goma.

“It’s no miracle,” said Friendly Water for the World Board Chairman David Albert, “It’s just good science, strategically and appropriately applied by people who really care.” BioSand Water Filters were invented by Dr. David Manz at the University of Calgary. He patented the technology, which requires no chemicals, electricity, motorized equipment, or moving parts, and is made of all locally available materials, and gave the patent to the world. BioSand Water Filters can remove up to 99% of bacteria, and virtually 100% of viruses, worms, protozoa, and amoeba which cause waterborne illnesses such as cholera, typhoid, bacterial dysentery, Rotavirus, hepatitis A, giardia, and cryptosporidiosis. Friendly Water for the World is a knowledge-sharing and training organization working with communities in 12 countries to help them ensure their own clean water supply.

“This is a story of hope,” said Jim Cooper, Olympia, Washington City Councilman and President, United Way of the Pacific Northwest, who is serving as the We Stopped Cholera Victory Campaign Co-Chair. “It is proof of how a very little bit can be stretched a very long way. We are humbled by the effort.” The total cost of eradicating cholera in the 26 orphanages was $1,980.

Dr. Kambale Musubao is a physician and surgeon in the Congo, who also runs three health clinics for war orphans. He traded in his hospital-based surgery practice, noting, “In the hospital, I could save at most one or two people a day. Working on clean water with Friendly Water for the World, I can save thousands.”

A celebration with all 3,800 children was held Goma on September 20th. Photos will soon be available. Friendly Water for the World is kicking off its four-month long We Stopped Cholera Victory Campaign with events in Olympia, Washington October 23-24, featuring awarding-winning humanities scholar Clay Jenkinson of NPR’s “The Jefferson Hour” (http://www.jeffersonhour.com). The aim is to raise enough funds to replicate the Goma effort and support other communities’ efforts to ensure access to clean water by a factor of 50.

Click here how you can help.
Yote Yawezekana! “Everything is Possible!” in Kiswahili