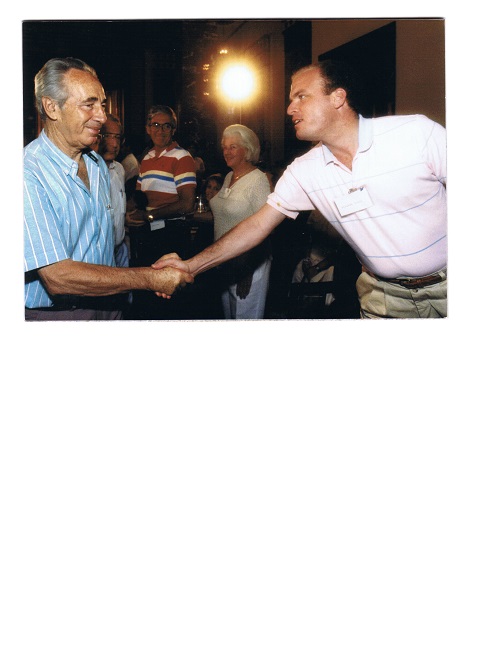 “Optimists and pessimists die the same way.
They just live differently.
I prefer to live as an optimist.”
Shimon Peres

– Editor’s note:
Shimon Peres is a hero of mine not because of his 7 decades as a leader in Israel, rather for the abrupt change and about-face he undertook in going from one of Israel’s leading hawks to being a Nobel Prize-winning Ambassador of Peace. In order to achieve such a stunning reversal of views, Prime Minister Peres developed an inner strength, courage, and wisdom to move into a state of humbleness to be a light-bearing champion of change, realizing that arrogance and bravado leads to war and does not serve his people. Only through humility can one do that. This understanding goes way beyond working for Jewish causes and the State of Israel, rather a visionary and true world humanitarian in an area of the world bereft of such leadership.

I was very fortunate to be the guest with a few members of my family on The Prime Minister’s Mission to Israel in summer 1988, an educational trip to exchange ideas, experiences, and viewpoints with Israelis from many diverse fields, along with tours of notable sites. After a day of break-out groups, I went up to Peres to shake his hand for his leadership in finding peaceful solutions in the Middle East. He won the Nobel Peace Prize not long after that in 1994, along with then-Prime Minister Yitzhak Rabin and PLO Chairman Yasser Arafat.

The transformation of his views and a passion for world peace by Prime Minster Peres mirrors that of another one of my heroes the world lost earlier this year, Muhammad Ali.
Their commitments in their changes of uplifting the world are truly testaments to a life well-lived!

– “Obama to attend Shimon Peres funeral in Jerusalem”
“[President] Obama led tributes to the elder statesman as a friend who refused to give up on the dream of peace.

Peres’ commitment to Israel’s security and pursuit of peace was “rooted in his own unshakeable moral foundation and unflagging optimism” the US leader said in a statement.

Peres, who was 93, held nearly every major office in the country, serving twice as prime minister and also as president, a mostly ceremonial role, from 2007 to 2014,” quoting France’s AFP.
Read more