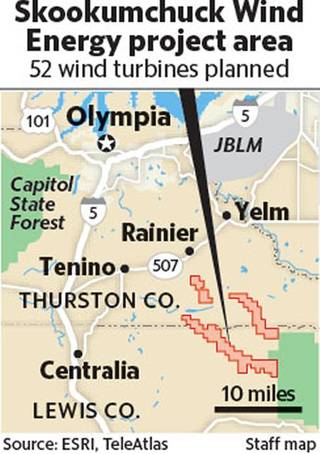 “Thurston County is requesting proposals for qualified firms to prepare a State Environmental Policy Act (SEPA) for review of a planned 51-turbine wind-powered electrical generation project on 19,654-acres of land that straddles the Thurston and Lewis county boundary, less than 7 miles southwest from Clear Lake.

The wind turbines would be located on Weyerhaeuser timber lands east and south of Skookumchuck Lake. The proposal by Skookumchuck Wind Energy Project LLC includes a 5-acre operations and maintenance yard, a 15-mile electrical transmission line and access roads. Of the 51 turbines, eight would be located within Thurston County.

The turbines would be built on top of ridges to maximize wind exposure, and including the rotor blades, would be about 499-feet tall. The operations and maintenance yard would be located on Weyerhaeuser-owned property at 16340 Vail Loop Road SE in South Thurston County,” quoting The Chronicle (Centralia, the NVN’s sister newspaper).
Read more