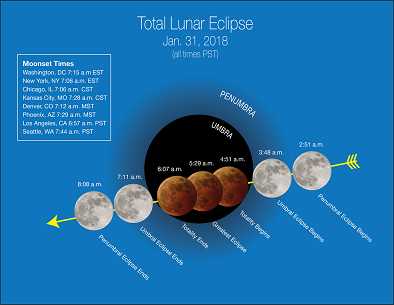 “Stages of the Jan. 31, 2018 super blue blood moon(weather permitting)
are depicted in Pacific Time with times for major cities across the U.S.,
which affect how much of the event viewers will see.”
Photo credit: NASA

– Editor’s note:
Total Lunar Eclipse is at 5:29am here Wednesday morning, plus a Super Blood Moon will be visible with peak viewing time in Yelm @ 7:44am – weather permitting.

“The lunar event on January 31 is third in a string of recent ‘supermoons,’ when the moon is closer to the Earth in its orbit and appears about 14 percent brighter.”

“It is also a ‘blue moon,’ which is the second full moon that happens in the same calendar month. The month’s first moon happened on January 1.

It all coincides with a total lunar eclipse, which is called a ‘blood moon’ when the moon is in the Earth’s shadow and takes on a reddish tint.

This rare trilogy of lunar events hasn’t happened in more than 150 years, according to earthsky.org. The last ‘Blue Blood Moon’ was recorded back in March 31, 1866,” by Liza Javier, KING 5 TV News, Seattle.
Read more